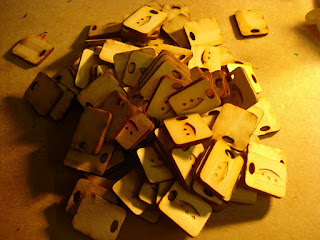 One of the nice things about empire was that groups tried to get some uniformity amongst themselves, our group had brown and mustard clothing on left and right, other groups had little trinkets like this to suggest they were all healers. It's hard to imagine that the next game is only 2 weeks away now, I'm hoping for another flood of orders again :)
Read more 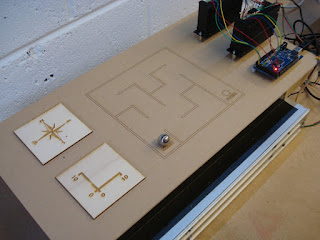 I mentioned this briefly before but I tidied it up a lot in time for the maker faire and added a few features to it. It's a CNC controlled marble in a maze, the X and the Y are belt driven rather than the more common tilt mechanism. The intent was to persuade people to type in a series of simple programming type commands to drive the ball around the maze from the start point to the end point. I'm pretty sure people didn't see it as programming which is probably a good thing as they were too busy having fun with it. I housed the electronics on top of the board so people could see the details, put in a compass and a scale and gaffa taped a hinge so that the whole thing could flip up and people could see the underneath. ( svg here ) 24 Projects/ 28 weeks In essence it's a very simple XY control, but to add some programming aspect to it I set up the arduino to understand a very basic language sent over the serial port. 'N10,E10' would move the ball
Read more 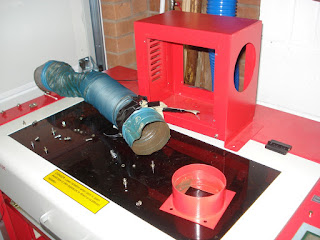 HPC laser came over today as my machine has recently experienced a serious drop off in laser performance. They had a quick look around and went to replace the laser tube as planned. Turns out the lens in the end of the tube was pretty well caked in gunk and is likely to be the main cause of failure. This is my mistake for overlooking the end of the laser tube, although the 3060 makes it particularly hard to even see the end of the laser tube let alone get in there to clean it. My laser is pretty dirty anyway and they politely repeated the instruction that I should clean everything more often. There was instant improvement, the settings I was using last night and having to cut twice burnt clean through the plastic today and actually set it on fire. So why the photo above? Well you know that when you put something back together again there are always a few pieces left over? I pulled the extractor fan apart to clean the impeller and when I put it back together I had all of the above
Read more 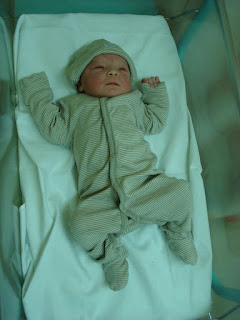 We had a little baby girl, Hazel Colleen Raynsford, born Friday 3rd May, 9pm at 7lb 6oz. She is doing exceptionally well and we're all settling into a new routine. Obviously things will be a little slower around here for the time being so bear with me. Currently I'm keeping on top of my orders but not my communications so if your email is important it may pay to nudge me after a week.
Read more
More posts