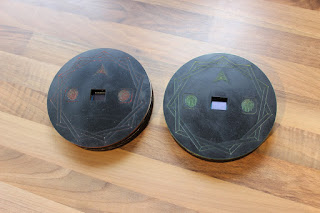 Another build for 'From Shadows', this time they wanted a device that could be used to track down other devices scattered around the field. I came up with a solution that used the ESP8266 to create a wifi network (nodes not shown) and these gadgets that scanned for wifi networks and reported the RSSI. The closer you are the stronger the signal strength and you know you're heading in the right direction. The gadgets were supposed to have a modern mystical feel so I made them from fluorescent perspex, the sheet was sprayed with black and the details cut through. The whole front panel was lit from behind with UV led's so the glow only shone through the cuts. I also felt it would be good if the gadgets had to be held in both hands, under the thumb prints are two tactile switches which need to be firmly pressed to keep the device on. I think this might have caused a bit of thumb ache from the players while they were initially looking for the nodes, it certainly ma
Read more
More posts