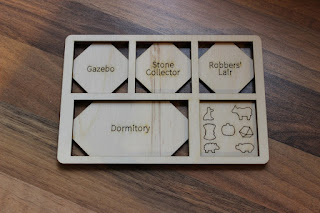 That didn't take long, once I had listed the Water Expansion trays I was asked to also do the Mini Expansion trays. These expansion look like fun for the original game of Caverna, I may have to acquire a set even if it's just so that I can take photos of populated trays. 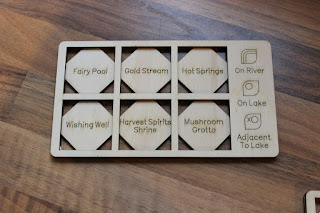 I've had the basic Cavernabuilding trays up on my etsy store for a long time now and they sell relatively well. I had a custom request to make a matching tray for the water expansion. I drew the files 6 months ago and showed them to the customer who never responded so, having done all the work, I received no money for it and never actually cut a tray. I figured I should finally get this one listed on my etsy store too because if it's not up there then nobody will know to buy it.
Read more 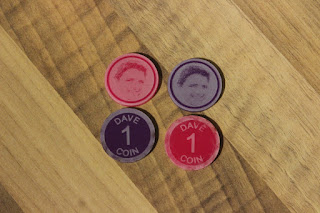 Some friends wanted some custom made perspex coins featuring Dave's face on them. I generally don't do a lot of engraving so it was a good opportunity to try and get some detail into the face. Lightburn has lots of options for engraving images so after a bit of fiddling I was able to sort something out where you could even see the smile and teeth.
The next issue was making the engraving round. Lightburn imports and engraves square images so I had to do some image manipulation before importing it. A white circle background with a ring provided the additional details. The reverse was a simple vector artwork for engraving. I had an annoying issue where I moved the sheet when I flipped it over so the reverse wasn't particularly well aligned with the front and I ended up cutting some additional pink tokens to go with the purple ones.
Read more