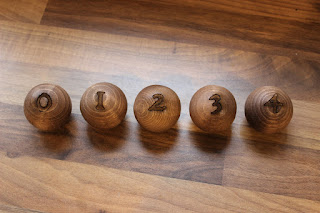 I recently had cause to engrave a bunch of wooden bingo balls for a project. I bought some cheap 40mm balls from the internets and stained them with some indian rosewood strain. The numbers themselves were engraved and outlined on both sides of the balls to make them easy to read from multiple angles. The balls were held loosely in place under the laser head, lightburn really helped with this project because it allowed me to set the reference point as the centre of the image. I could align the red dot to the very middle of the ball and know that the number would be centrally aligned.
Read more 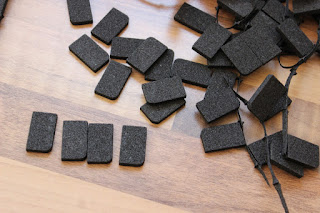 A bit of a sad one for these scales. They were for a cosplay costume based on Avengers Endgame. It turns out that 2mm foam was too thick for the scales and the 1mm foam didn't arrive in time for the convention. These scales were cut on my newer laser though and the RF tube seems to have made a lot of difference to the vertical cuts. The 100W glass tube blasts away a big 'V' shape in the foam where as the 30W seems to have cut away just enough with minimal reflections. I shall cut more foam on the faster machine in the future.
Read more 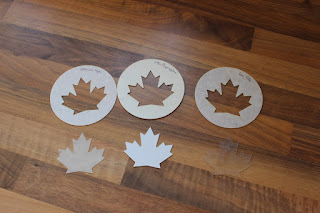 I was asked to make some custom coffee stencils but I wasn't really sure which material would be best so I tried a range of different types and thicknesses. I think the Petg worked the best of the three materials I tried, it cut quite nicely once it had been masked front and back with vinyl transfer tape.
Read more 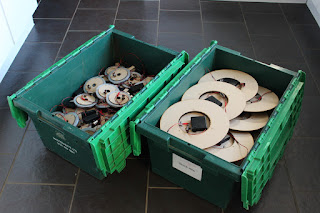 So while my kickstarter was ticking over I had a fair amount of time to complete some other large projects. This one involved me making 35 sets of rotating cake rings, where a set includes one big ring and one small ring. These rings are going into Harry Potter cakes as per the video in the link. The trouble with ordering parts from China like this is that half of them were different. Many of the larger rings came with 3 mounting holes instead of 4 and none of the holes were drilled all the way through so I was unable to bolt them in place. I ended up drilling through the rings myself which was dull and time consuming. https://www.facebook.com/DinkydoodleDesigns/videos/1373384352766827/
Read more
More posts