- April 17, 2013
For a long time postage across the globe has been costing me £3.30 but I've been charging £3.00 and taking the minor loss. Postage has gone up again this week though to £3.50 so I'm going to have to pass the cost on (because that still doesn't include the price of the envelope and labels etc).  Because of the way I'm using the blog though this might take a while for me to manually change all the paypal links so order quickly and you'll get in on the cheaper prices.
Read more 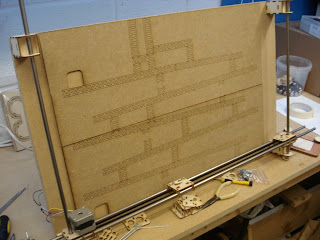 Just a quick update from the weekend. I had to recut the X rails 3 times so far to get to something that works well with the distance between the two vertical rails. From silly mistakes to design flaws I think I've finally got something that is close to working (close enough not to recut it for another week) I added some back boards this time to make things a bit neater and better aligned. I'm now in the process of populating those boards with girders and ladders to make it look functional, then I'll probably work on the ball lift next so that I can at least have circulating barrels to show off if nothing else.
Read more
More posts