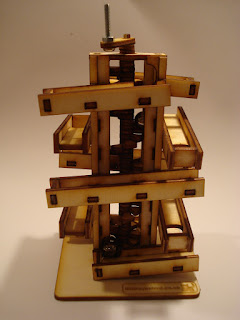 This one has been in development for a few weeks now, every time I seem to get it working the ball jammed somewhere else so multiple prototypes later and hours of tweaking and assembly I'm proud to display Marble Machine #2. For my second marble machine I really wanted to add in an Archimedes screw but the laser only cuts 2D profiles which makes it quite a large challenge, after several failed attempts I realised I could stack parts up to form a spiral staircase. As the width of the material is about 1/4 width of the ball it happily steps up the spiral. Figuring out the run down again was tougher than the spiral because I couldn't get the ball back onto the right side of the machine, then I realised that I could run the ball up the other side of the spiral instead and duplicated everything. This marble machine essentially has 2 lifts and 2 runs. ( svg here ) Made from laser ply instead of MDF this machine looks nicer and feels better than the last machine. It takes a lit
Read more
More posts