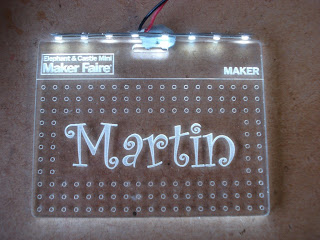 The participant information packs for London Mini Maker Faire were sent round on Tuesday. In the back of the pack it talked about the maker badges for the event, they were all laser cut from black card with a series of holes through which we were supposed to embroider our names. There was also a warning not to wear white because they were charred around the edges. I have white TShirts for MSRaynsford so I thought I would hack my own badge in advance. I came up with this side lit, acrylic badge with fancy name font and it really stood out at the faire.
Read more

Rather short notice but it's only been a week since I decided to go. I'll be exhibiting at the Mini Maker Faire this weekend , 6th of July. It's a one day faire but it's been mentioned on Boing Boing and the Make Blog so I expect a good turnout, (even more so because it's London). I'll be doing something a little different this time, I'm taking dozens of kits and the tools to assemble them, I'll be selling them on the day and helping people actually make them. I've also prepared dozens of assembled items for people that don't have time to make their own. Look forward to seeing you there.
Read more
More posts