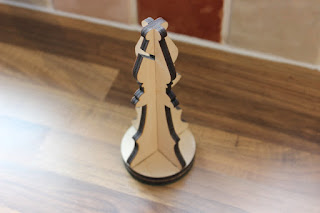 I made this bishop as a sample piece, hopefully this is the start of something bigger and I don't just mean an oversized chess set. It's made from 6mm birch so it's nice and sturdy and it was finished with a lasercut disk of felt on the bottom. I can't decide if I should do the other pieces with black paint or brown wood stain but I'll probably try both.
Read more

Last summer I ran a moderately successful kickstarter campaign , where I did a production run of the fractal puzzles I designed several years ago. Since then I've had numerous requests to design more fractal puzzles and after a fair bit of research I have discovered four more space filling curves that lend themselves to fractal puzzles. I'm going to be kickstarting these in the next few weeks so now is your chance to follow me on KS and snap up one of the early bird deals as soon as they get launched. I will obviously post to the blog here when the campaign goes live too. In the meantime, stay tuned.
Read more
More posts