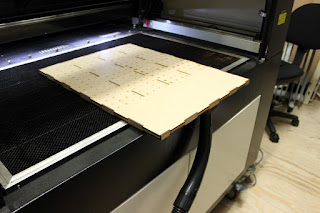 I have cut a lot of foam with varying degrees of success. 6mm foam can be held in place using magnets, but 10mm foam is too thick for the magnets to pull onto the honeycomb and 2mm foam gets squashed by the strength of the magnets. I needed a better way to hold these sheets in place so I made my own Vacuum table . A vacuum table is exactly as it sounds, a vacuum pump is used to pull the work piece down onto the table holding it into place for the duration of the cutting. The warped pieces of foam I'm using get pulled flat across the whole area rather than just a few points where the magnets are and the whole top surface is free of obstruction while cutting. The top layer of the bed is sacrificial, the foam doesn't need a lot of power to cut through so the mdf table doesn't mark too heavily. A standard hoover is used to provide the vacuum for the table. A small section of foam is placed across the table and any remaining holes should be blanked over, this can be
Read more 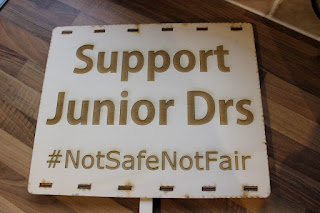 My wife is a Junior Dr which means she was on strike today, out on the picket line in the rain. Her cardboard sign dissolved and I realised I could step in and make something more substantial. The batons along the top and bottom aren't really necessary but the board was rescued from a previous project. politics For anyone who isn't aware of the situation, the government want to make the NHS run a 7 day elective service. This means you can have your non essential procedures done at the weekend. To achieve this it intends to make junior doctors work longer hours and more weekends without putting any more money into the service. This is obviously not safe for patients or fair for doctors. The government has mislead the public by stating that the NHS does not operate at the weekend. They have incorrectly claimed that you are more likely to die if you go to hospital at the weekend. They have claimed that they will give the doctors a pay rise, the 11% rise to the
Read more 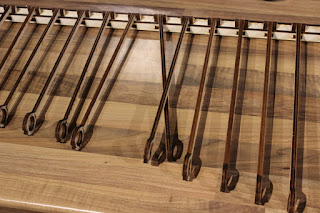 I've been forced back onto my old laptop for the last week and I've found a few old projects that weren't ever posted. This is yet another iteration of the wave pendulum that failed. As you can see I used sewing pins as pivots, the pendulums swung for long enough but they had a lot of waggle, so much waggle that they could even cross over each other and interfere while they were swinging.
Read more

Cracking under the strain 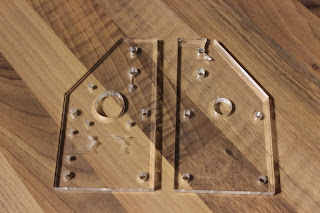 I don't use the Sea bass a lot, just for the occasional thing but the cracks along the acrylic parts just keep getting worse. It's the wrong material for the job really and it doesn't help that they're mass produced in China and all the bolts overtightened. I redrew the sides and cut them in 6mm Birch again. I still don't like birch, there was an inner knot and I ended up finishing it by hand but it's the right material for the job. It looks much better in wood too :)
Read more 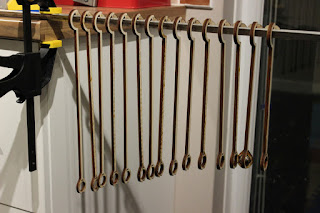 I have wasted so much time on  these things , after discussions about pendulums I took another stab at making a wave pendulum. The idea was straight forward, use a knife edge to balance the pendulum. This solved several problems, it's a simple design with no calibration required and the supporting beam could be an angled metal bar which would take all the weight of the pendulums. The knife edge was created by sanding down a piece of 0.8mm ply and initial tests were very promising.  I made the shortest pendulum first to see if it would swing for long enough, the system needs 1 minute for a cycle and the pendulum swang for 3 minutes. I ploughed on and made the rest of the set. When they were all pulled back though there was an element of wangle on some of them. This produced uneven swing and the cycle was broken before it even got going. Experiment 3 was a write off and there ends my efforts. If you want to make a wave pendulum system, using string and measure it out to t
Read more
More posts