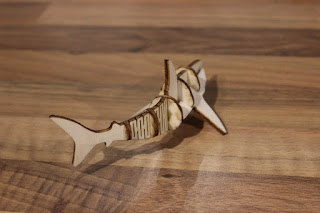 The 1000th project for this blog very much took on a life of its own. I knew I wanted to make something big and impressive so the idea of making 1000 of something had a lot of appeal. The laser makes it very easy to churn out 1000 identical items so I also wanted to make something that needed assembly, something where I had specifically touched all 1000 things. So I built this little shark model , it had a few iterations and eventually ended up with five ribs and a flexible tail. I managed to tessellate 60 onto a  sheet of poplar ply  and I set the machine to cutting out 18 sheets, each sheet taking just over an hour to complete. In between sheets I would pull the parts out of the laser and scoop them into boxes for later assembly. I spent many nights sat in front of the TV assembling parts and in full flow I was assembly one every 45 seconds, so it was roughly another 18 hours for shark assembly. This left me with two,80L crates full of sharks and lots of time to figure out what t
Read more 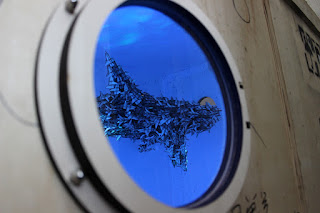 This is my 1000th laser cut item. It's nearly my fifth blog anniversary and I wanted to make something epic so I built this shark tank and housed 2 large sharks inside it. Each shark is made from 500 smaller sharks so over the last few weeks I have cut and assembled 1000 of the smaller laser sharks , 1000 things for my 1000th item. Portholes  into the tank allow you to see the sharks from all different angles.
Read more 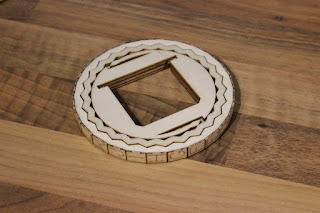 I set out this evening to make a cryptex , it was fairly ambitious given that I also had to pack for New York. Instead all I managed to achieve was a single ring prototype but I figure that is most of the hard work done. This cryptex features a ratchet to make the ring rotate in a single direction. 27 digits, I view the blank character to be equally as important as the other 26, and as this cryptex will be infinitely extendable you could have multiple words in the code. The central section is square which means it doesn't have to be made from 100s of stacked layers.  Most significantly there is an outer ring containing all the letters. The letters are glued into place using a jig  to ensure they are all square on the wheel but the wheel can be rotated in relation to the keyed slots, this means the code word is actually going to be changeable once the cryptex is assembled. Unlocked Locked
Read more 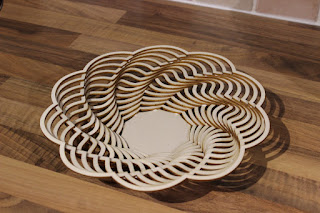 I made some bowls before but I lost some of them at the Newcastle Maker Faire this year, as I'm bringing my 'A' game to New York, I thought it was quite sensible to make another one for display. I chose to make another wavy bowl from a single concentric stack. This time the layers had guides to show you where to glue the next layer ( svg here )
Read more 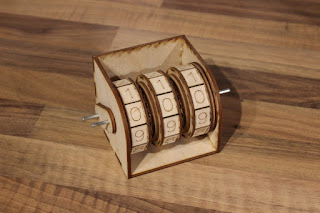 I finished the counter mechanism , I doubled the size of the wheels to make them easier to run and I added a detent mechanism to ensure that the smallest wheel falls into place and it also stops it spinning wildly. ( svg here ) The geneva mechanism was rebuilt using a layer of 2mm ply, this allowed the two different gears to sit half a step out of sync with each other and eliminates any clashing as the gears rotate. The detent mechanism gave me a few headaches, typically these mechanisms usually look like a rounded ratchet. The rounded end allows the lever to slide in either direction. The trouble with laser cutting and wood is that the edges are a little bit rough and I really struggled to make this design work in the reverse direction. To solve the problem I got thinking laterally, I put some 0.8mm ply in side ways to press against the sides of the decagon. I put in 2 bars to create even pressure on both sides of the wheel. As the decagon rotates it flexes the two ba
Read more 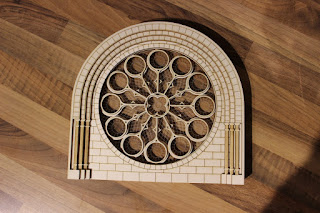 I made a church window a long time ago and I was never very happy with the way some of the layers were offset. The perfectionist in me always knew the glass layer was a bit awry from the rest of the framework. Given that it is well received at most events I figured now was the time to redo it and make a 'perfect' one this time around. It's a pretty straight forward layered design, the only real tricks are engraving on the pillars to add some depth and make it appear like there are bands around them and the perspex layer is a dodecagon, rather than a circle, to prevent it from rotating within it's hole.
Read more 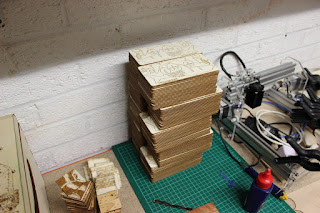 I'll be attending the New York Maker Faire  this weekend coming. I'm taking as many items and kits as I can possibly manage but I also wanted something smaller that I could gift or sell as appropriate. I ended up cutting 200 of the mini shark kits, if you would like one simply come and find me at the maker faire and tell me you read my blog. I actually cut a whole lot more sharks last month but that's a project due to be completed in the next few days so keep an eye out for that.
Read more 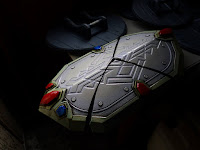 Over the last 5 years I've made a lot of stuff for a lot of people. As I approach 1000 laser cut items here is just a small selection of things that people have sent back to me recently. It's always great getting follow up photos, it lets you know these things are appreciated.
Read more
More posts