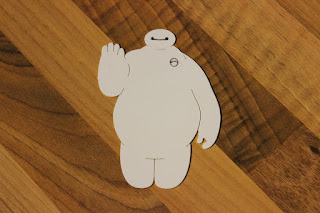 I wanted to make a little Baymax to go into Eli's birthday party invites. This is cut from 0.8mm white polypropylene. The details were coloured in with a black fine liner pen. ( svg here )
Read more 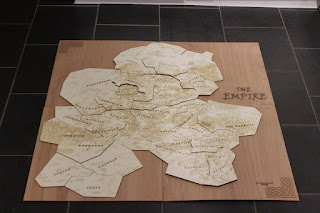 By request I made a medium sized Empire Map , it's pretty much the same deal as the big one but with a few tweaks. This map is intended to be taken too and from the events so it's a bit smaller at 1000mm x 900mm. It has some extra Otkodov regions at the top and also  the barrens  just to the right hand side. The regions are one of three different heights instead of four different heights. The main difference is that each region is removable, this was achieved by placing two pegs under each region. The regions line up and with the pegs and sit in the right places on the board. Finally I added a little celtic flourish in each corner, you might recognise these as the Celtic knot dice. It turns out that having the six basic sides of the dice allows me to quickly and easily construct flourishes for decoration.
Read more 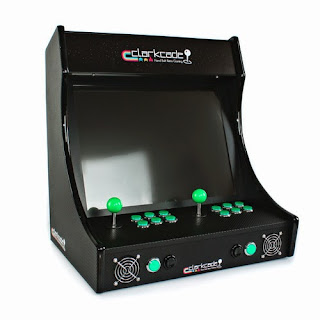 One of my 12 projects this year was/is going to be a retro gaming cabinet. While I was at the UK Maker Faire  I met Simon and I saw his awesome Clarkcade cabinets  and in particular 'the fighter'  which is exactly what I envisaged for my cabinet. These machines are top notch quality have all the right features and finishing touches, so I was keen to get some hints and tips. After a short discussion it turned out that Simon was keen to try getting a some parts laser cut which was very convenient, now just two weeks later I've cut my first cabinet for him and there will hopefully be many more on the horizon as we try to figure out the best way to laser these machines (such as yesterdays hidden joints ). My cabinet will still be put off till slightly later in the year but what a head start I'll have when I finally get round to it.
Read more 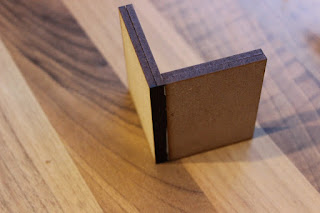 The weeks just fly by and it's weird because I was busy making things last week. I made a quick prototype for a hidden finger joint. The item in question is intended to be made from 12mm mdf which is something I can't cut on my 80W laser so the next best thing is to cut it in 2 pieces and stick them together. If the inner layer is hidden away though you can add these kinds of fingers to make the assembly really easy.
Read more
More posts