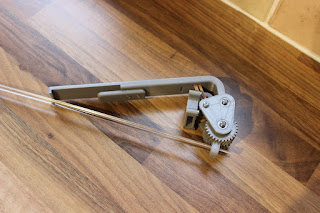 I have enjoyed creating all the timelapse shots recently, Octolapse is a great addition to Octoprint  making it easy to create amazing shots. Once I dealt with my lighting and white balance issues I started to look at my video process. The print bed lowers on my machine so, with a static camera, the 3D print has to start at the top of the screen and fill into the lower half. I preferred a video where the print started in the middle of the screen. A mechanical solution to keep the print in the middle of the screen seemed to be the easiest solution. I made a video about it as well as this blog post, if you like it please subscribe and I'll make more videos. The design is relatively simple, the camera is still mounted to the top of the frame but an arm extends from the camera rig out under the print bed. As the bed descends the arm is pushed downwards and this motion is used to tilt the camera downwards. On it's own this would have the effect of making the prin
Read more 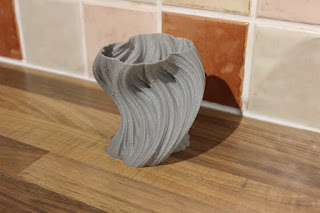 I have built a time lapse rig to tilt the camera and help me take nice time lapse shots, this vase was a quick printing test piece to help me check that it's all working as it should be. There's still a minor tweak to be done to some angles but otherwise the rig is working fine, it's completely 3D printed and all that's left for me to do now is to prepare the files for sharing.
Read more 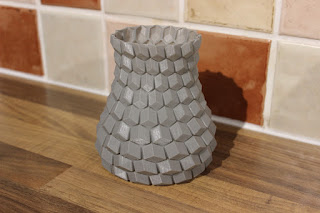 I have finally finished my 3D printed time lapse rig (blog post to come) and this lovely vase was intended to be a fast print as a time lapse show piece item but it proved to be unsuitable and I learnt some valuable lessons along the way. There are several different 3D models provided for this vase, I started with the 2mm wall thickness design, it slices well and the print started ok. After leaving it for an hour to settle the base I became aware of a lot of noise from the garage, the extruder was working overtime, After it had printed the inner and outer skins, each little bit inside the cubes was a separate island and my bowden extruder was putting in a lot of effort to extend and retract each time. So much so it was really slowing the print down. Another hour later and it had barely done the first row of cubes, so much for a fast print, I cancelled it and started again. The original solid shape provided on thingiverse is it's intended design which can be printed in a
Read more 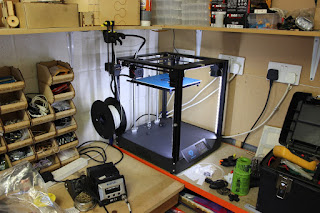 After sorting out a sturdy camera mount for my timelapse videos I needed to sort out the lighting to go with it. I was using a large lamp wedged in front of the printer and then diffused with a sheet of paper, the trouble is every time I went near the machine it would blind me. I had some cool white 24V LED strips that could connect directly to the PSU in the printer and be mounted on the framework. I printed some mounts that angle the strips in towards the print, these were done in two parts; the 45 degree angle to point the lights in black to match the framework and a white light cover to hold the strips in place and diffuse the light some more. ( stl here )
Read more 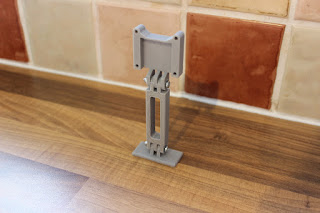 I made use of this camera mount for a few weeks but the arm is a bit spindly and wobbly. The 2020 mounting was good but I have a sturdy frame all the way around my printer and I wanted to bolt it directly to the top. I designed a new camera mount that was stronger, with less wobble that holds directly to the top. I didn't want to bolt through the frame yet so I just clamped it in the appropriate place for the duration. I also need a long ribbon cable to put the raspberry pi in a more sensible location so I had to wait for that to arrive. The new camera position was too high to get a decent time lapse, you couldn't see the layers build up during the print so I ended up removing the middle section and mounting the camera under the frame instead. This gave a much nicer position and is what I used to film the different egg prints . ( stl here )
Read more 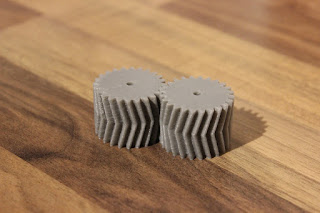 I have a design in mind for my timelapse rig and there are a lot of things to learn in the process. I'm picking up a new CAD tool for 3d modelling (onshape) and I wanted to test out some helical gears to get smooth camera motion throughout the movement. I was pleasantly surprised to find a gear generator in onshape so I just had to figure out how to mount the parts and animate them etc. They printed well and are perfect for the next step even if the axles were too thin and snapped after some basic use. The gears will be mounted on bearings/screws anyway. The whole thing was caught on timelapse. ( stl here )( onshape workspace here )
Read more 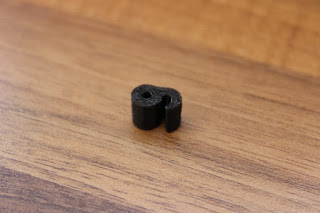 I've been changing colour on a few different 3D prints recently and some of the rolls started unravelling themselves between prints. I took a quick look at filament clip designs and decided upon these simple ones; because they clip onto the filament itself they'll work for all of my 1.75mm filaments regardless of which spool it's on. Obviously the ones that clip to the spool edge are more secure but this suits my needs for now, the only real problem was trying to turn less than a second of timelapse into a watchable video :) ( stl here )
Read more
More posts