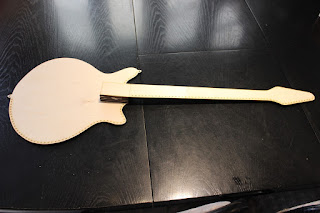 A while back I made this cake board for a guitar cake. It's actually a second attempt, the first one didn't have a break in the neck meaning the the neck would have to have been as thick as the base. This time around it was stepped and I left the option of changing the height of the step as required. Around the bottom edge is a line of holes designed for cocktail sticks. When inserted tight into the holes it will stop the cake from sliding off the bottom and the hole thing can be picked up like a regular guitar.
Read more 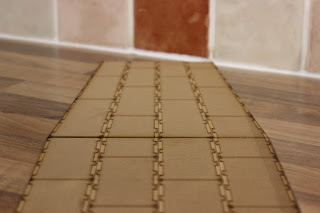 I spent some time looking into forced perspective drawings. I was trying to generate an effect where it looked as though a flat sheet of material was sloping downwards. There are plugins for inkscape that generate a perspective effect so the first step was to create some footplate artwork in a vector format (raster formats would also work in other programs like gimp). The original flat sheet was then warped to the second sloped sheet. I clearly should have made the second sheet shorter because the panels closest to the eye were actually stretched in length but the effect is still pretty prominent.
Read more 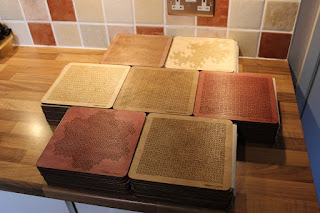 I had a nice big order for my laser cut tray puzzles last week, feels like ages since I completed the kickstarter so this batch of 70 took longer than I expected it to. They're destined for the Puzzle Master Website  if you're in Canada or the US and would prefer to buy from there.
Read more 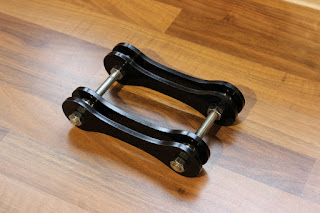 The He3D printer doesn't have anywhere convenient to store a roll of filament so it needed a separate spool holder, there are lots of designs online but I settled for a simple clone of a free standing type designed to fit the threaded rods and bearings I have lying around (M8 rods and skate bearings). ( svg here )
Read more

Goodbye Ender 2, welcome back HE3D I3 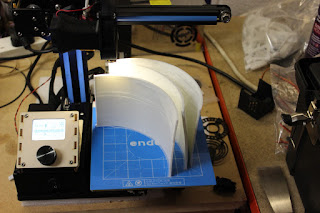 I bought the Ender 2 because it was only £100 which was about the same price as spending hours fixing the He3D, it spent 6 months sat on the bench waiting for me to fix it and as soon as I did it's been printing non stop. I ran the outer case for my currently unspecified turbine prop, the ender 2 fared valiantly but there was some separation and severe stringing at the higher levels. This combined with the constant slicing and juggling has made me realise I could do with something bigger. I rescued the He3D I3 from the loft where it has lived for the last five years. Knowing more about printing this time around I was able to resurrect it fairly quickly. The software to drive things has come on a long way in that time which really helped me get up to speed quickly. The original failure was that the hot end died after a dozen prints. I recently bought a new hot end to replace it for a staggeringly low price of £3 and with a bit of fiddling and juggling I was able to mou
Read more
More posts