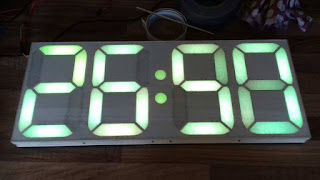 The From Shadows team requested a large countdown timer to count 2 hours, I offered a full 99 minutes instead to save myself an extra digit but I think this giant RGB seven segment display fulfils the brief well. I opted not to use a real time clock chip because it only drifted a few seconds over the two hour period which is close enough. The illumination is provided with WS2812 LED strips and the controller is the ESP8266 so if I desperately wanted accurate timing I could always implement an NTP server and connect to the local wifi. Again, I wish I'd taken more photos of this project in action but I may well get another chance if I build another one for our local ninja warrior training gym .
Read more 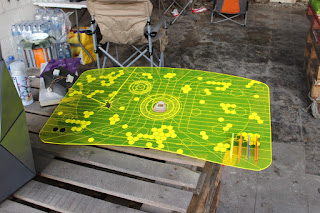 Coming in very highly on my overdue project list is this Futuristic control panel for the From Shadows event that happened over a month ago. I was rushed and wish I had photos and a video of more of the details. I don't even appear to have photos of the separate parts. The brief was for a control panel that could be split up into parts that were acquired throughout the course of the weekend. I wanted to take it a step further and split it up into parts that make the panel functional when connected back together. Two large hex bolts on the back could be removed, without tools, to provide access to two compartments. The first compartment was designed to house a 'battery', the second compartment had some exposed connectors. When the battery was inserted into the first compartment and the the connectors bridge with the appropriate loop power was supplied to the front of the device. The switches in the bottom left hand corner have illuminated LED's, flip both of
Read more
More posts