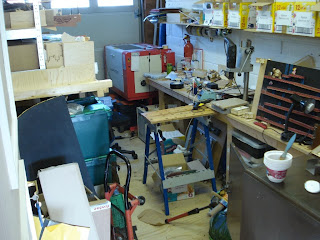 Because of the rush to get project 52 finished the garage ended up being a very large dumping ground. The overflow ran into the utility room and onto the kitchen benches. I was literally stepping round things to get in and out of the garage so things had to change. My improvised standing height bench was largely full of junk and never got used, the crates underneath it were all full but most of them never moved so I've set about the task of sorting it all out.

The grand plan is to remove the standing bench and replace it with a bench that matches the other side, this should make the place feel more open while I'm sat down. Matching shelves will provide additional storage. While I'm making improvements there were a dozen little things about the laser that need to be improved too. The metal base that it stands on feels quite flimsy, it rocks alarmingly during some cutting operations. I've built a new solid base to go under it, it has room for the chiller. The other sid…
Read more 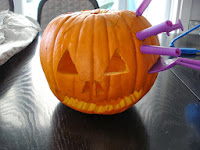 It's that time of year again so we made pumpkins, Eli was actually the one to decide that the useless store bought tools should be stabbed into the side of the pumpkin so that's where they now live, the rest were made with my ever faithful scroll saw blade onna stick and scalpel. If you delve back far enough into the archives you'll see pumpkins were on of the first things I ever posted, long before I even bought a laser cutter. 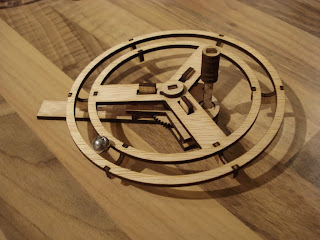 I didn't previously release the marble roller plans, it was functional but not really working, the gears were a bit crunchy and there was no where easy to hold it. So I took a second shot at it, then a third and finally a fourth shot at the design. Although revamps are easier than the original they're still pretty time consuming, each version gets closer and closer to something that works. (photo of all 4 below)

The final design is a lot more solid because of it's low height. The turning handle became just a stub because it's important for this design to turn with consistent speed. T…
Read more 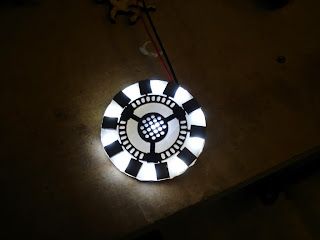 I made a teeny tiny arc for Eli for Halloween this year, I actually started last year but it became quickly apparent he wasn't going outside with all the scary monsters so it literally got shelved for the year. I finished it off for him this year and he wore it to a Halloween story walk on Friday.