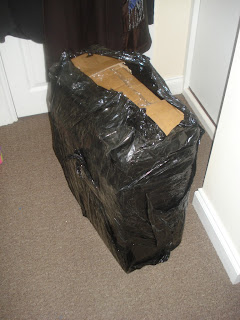 My parcel from HPC arrived, they've sent me an entire XY frame so I can pick the parts I need off of it. I replaced the X axis in about 2 hours so now I'm ready to go to HPC tomorrow to get it aligned and I can fire it up again.
Read more 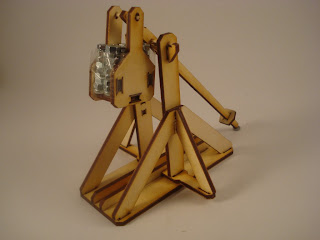 The very last of the items I was working on before the laser broke. It's a version of this trebuchette  modified for 3mm ply. It's quite sturdy and clicks together well so it's a nice kit those guys are selling. I had to modify the bucket to hold nuts and bolts and a counterweight and instead of using string for the slingshot I used a nut and a bit of wire. Video after the jump
Read more 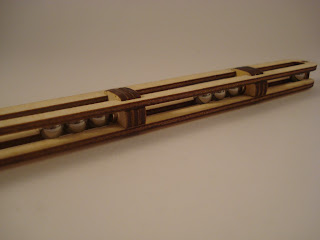 I took a second stab at the gauss gun. This was intended to be a 3 stage version but I only cut brackets for 2 stages before the laser broke. There are 3 magnets to each bracket, with the middle one being large than the outer 2 to hold them in place. 2 sets of rails allow it to function at any angle and a small magnet holds the first ball bearing in a rest position ready for a shot (See the vertical pictures).  It's finished enough for me to learn what I needed to learn. The rails could be closer together, the magnet sandwich works well and ply seems to produce a slight bend to the rails if you're not careful. Now onto the 3rd version of the gun which will be a much bigger step up. ( svg here )
Read more

The item that destroyed my laser 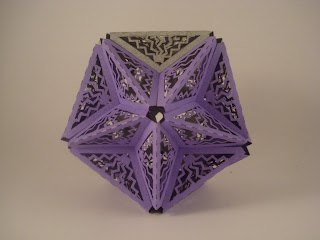 It's a shame it's so pretty otherwise I could happily forget it. It was originally intended to be purple on the inside and grey on the outside but the second half of the two tone paper caught fire, so I split the sheets back up and made it half grey, half purple. It's the second variation on the great dodecahedron  and again not using square cards but I really think it could be done with normal playing cards too. ( svg here ) More after the jump
Read more
More posts