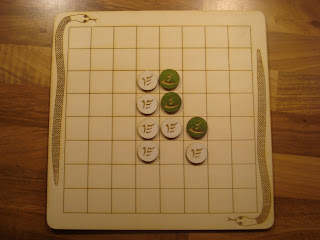 Another LARP commission, this time for a variant of the Othello board game . The runes, snakes and colours are apparently all symbolic but I think it may take me a while to figure out why.
Read more 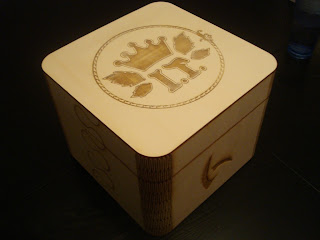 After making the first large wooden box  I was fortunate enough to be commissioned to make a second one. This one incorporates all the improvements  of the first box as well as some big changes to the internal structures as described below. I used the scraps from between the jigsaw edges to create overlapping sections. The two edges were interlocked and then flattened and glued. This ensures that the surface is completely flat when it's glued together. Both sides were glued together first and then the panels were slid over framework, the living hinges allowed it to stretch. I turned the verticals of the frame through 90 degrees. This puts more surface area against the side panels and gives more places to glue the things together. I cut a notch out of the back to mount the chunky hinges in. I only used one pair of magnets as a catch this time and it is still strong enough to hold the lid shut.
Read more 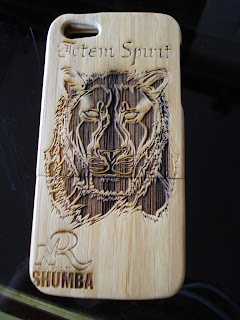 I had a visitor on Friday who came down to see if some of his designs would work when engraved on the laser cutter. We had a few false starts trying to get the power settings correct but once we'd figured that out they all came out really well (bar a few alignment issues). I think the plan is to sell these ideas and the first one is available currently on ebay . Only one of the designs didn't translate well which is a shame as this was apparently the most popular TShirt . But we had a few ideas about thickening the white lines etc which should make it plausible. Was a good afternoon with only one small fire :)    The anodised aluminium cut really well and left a nice contrast on the phone, not entirely sure why the photos appear fuzzy here.
Read more
More posts