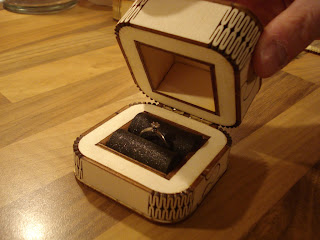 In reverse order now, I actually made a prototype for the large wooden box that in many ways is much more successful. This box still has a living hinge holding the lid on and the smaller scale of the item made it much easier to assemble. I flipped the box over and put an engagement ring it because I thought it was just the right size for the job. It's essentially a square box inside a rounded box but that gives quite a nice wall thickness to the box and a certain sense of style. The front and back sections connect with a big 'jigsaw' joint, slightly overkill for the small box but essential on the larger one. The lid is held shut with 3mm x 9mm diameter neodymiums they're strong enough to pull through the wood. It could easily be engraved, or inlaid or a million other things to smarten it up a bit which is why I'm sharing the files with you guys, let me know what you do with it. (svg here) 26 Projects / 30 Weeks 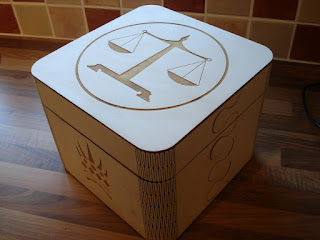 For LARP we required a large container with an 8"x 8"x 8" maximum volume, preferably with some engravings on the outside. I went all out for this one, designing a box using living hinges and having a nice amount of wall thickness. Ultimately I made a few silly mistakes and had to bodge a real hinge into the back for opening the lid but it's a really nice box and I hope that someone commissions a similar box so that I can make the tweaks and perfect the design. The prototype however is a really nice box which had it's tweaks so I'll post that up shortly. (svg here) 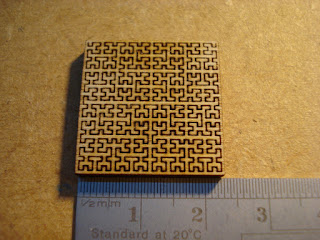 Following on from the teeny text I wanted to see what kind of resolution I could get out of the laser. I chose the Hilbert curve as a nice little test pattern as it starts in one corner ends in another and has 1 single continuous line running across it. The first piece was straight off the drawing board and for whatever reason was 23mm wide. It cut perfectly except a slight blank patch at the start where the laser presumably was turning on

The second attempt was shrunk to 15mm wide and again is clearly well defined.

The final test piece was 10mm wide, each of the lines was cleanly etched into the material but the grain of the wood started to make it harder to see. I'm pretty impressed though and will be looking to do more things on a small scale shortly.