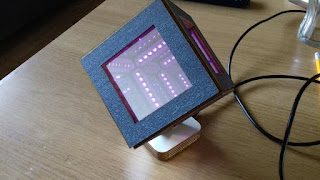 Having announced this is my last few blog posts, of course delays were subsequently inevitable. I tweaked the kit one last little bit and made myself a shiny new cube (I have 3 now) and while I was putting it all together, doing the all the soldering work, I realised that most people were going to fail to build the kit and I just felt the whole thing was going to end up with lots of support and me sending out spares and replacements to people who were struggling I've wouldn't consider it to be difficult and I'm not the best solderer in the world but I do know how to solder. The kit in this version was using RGB addressable USB strips, the links around the corners all soldered with extra wires  so I went back to the drawing board, bought some hard PCB strips and have ultimately designed my own PCBs for the job. I'm now waiting for those to arrive to see if they will be suitable for a simpler build. If it works I can move ahead with a kickstarter if it fails I
Read more
More posts