A second mechanism for Vale LRP and another file that has been floating round the internet. This Iris is a neat piece of engineering that has been built by dozens of people. I rejigged it slightly to put some better gears around the outside but other than that it's the same. Instead of using nuts and bolts to hold it all together it is all made from wooden parts, each pivot point is made from a 6mm wooden dowel. ( svg here )
Read more

I needed to make a dohicky for Vale LRP and I wanted something quick and easy so I trawled the net and found these  non circular gears of Thingiverse . A bit of steampunking later and I had something neat that would fit into the genre. I've included my files here which are a bit of a mess but at least they will open in inkscape now ( svg here )
Read more 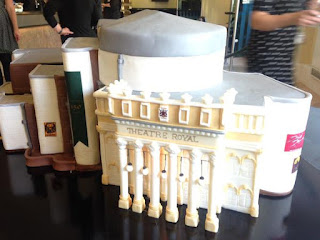 I recently helped Dawn from Dinkydoodle Designs  create a cake for the 150 anniversary of the Nottingham Theatre Royal. The cake was presented to Prince Edward as part of the celebrations and he had the honour of cutting it. The cake was built in 2 halves and 5 floors, each floor had a baseboard (laser cut), built up with sponge cake and covered with chocolate ganache before the decoration and detailing went on. The floors were separated with cake frame to stop them squashing the sponge ( now available from Lakeland plastics apparently ).  My involvement didn't stop with base boards though, once the basic shape was carved out I was called back in to wire the cake with lights. The front porch is lit, the chandelier and auditorium were illuminated with LED strips and the stage area was lit with a WS2811 strip and an arduino nano changed the colours every 10 seconds to give a sense of movement. Here is a little video tour of the cake once it was opened. The cake w
Read more 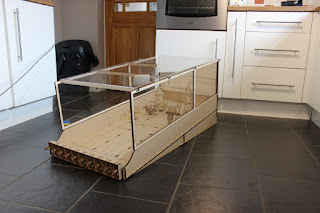 This project was remade from the first prototype and it was ready for my Cambridge workshop on the 13th, it's just taken me an additional 2 weeks to actually write about it. The principle is very much the same, I have fully enclosed the range with perspex to make it better at keeping the ammo in the range but also added a few other features. This time I ran the strings over the top of the board. It was easier than worrying about routing the string past the braces on the underside of the board but also it allows the kids to see a greater connection between the levers and the targets. In Cambridge nobody asked what the levers were for so I guess it served it's purpose. The levers are now vertically mounted so that gravity pulls them down again, this makes the string slack while resting and the targets more likely to fall over. The targets themselves are now bolted to the base board rather than glued, this makes them nigh on impossible to break off with catapult shot.
Read more 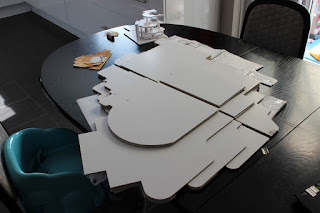 This is another large cake framework for Dinky Doodle cakes, This is taken from a floor plan of the theatre royal in Nottingham, each layer is a different floor of the building and it will be used to create the whole building from cake. The top layer is a roof because inside the cake the auditorium will be recreated with lights and a stage. This is Dawns model of the cake that she cut by hand to show me what we are doing.
Read more 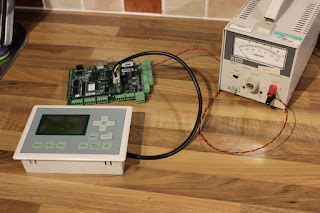 Not every project can be a success and there is a popular mantra that you should fail and fail fast. You learn from failures and the sooner you get them out the way the sooner you can move on to the right ways. I don't have a lot of failures, I have a lot of projects that get put on hold until I know how to progress them, some of them are on indefinite hold at the moment. Tonight's project has been on the cards for a few months but it failed and relatively quickly so I thought I would write about it as I'm no longer working on it. A lot of Chinese laser cutters come supplied with the Leetro controller MPC6515 or MPC6535 , both use the PAD03  display panel to communicate information to the user. The system has a fair few quirks but the one that really bugs me involves the Z axis adjustment. You press 'Z' to move into the height adjustment mode but pressing 'Esc' does not get you out of the mode, you have to press 'Z' again. The idea is simple tho
Read more 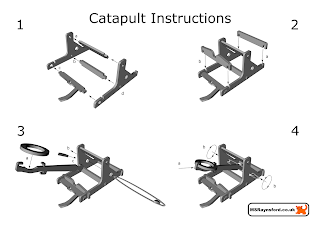 The catapult  has been around for a long time at various scales and versions, I recently sold a dozen to someone for a wedding and realised that the instructions were lacking a little. I redrew them attempting for a new words Ikea style, they're not as clear as they could be but I think they're acceptable and I'm pleased with the artwork anyway. ( pdf here )
Read more
More posts