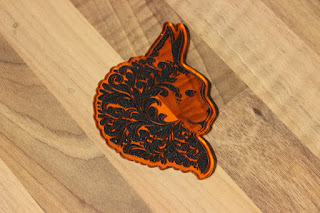 A lot of work has been done to use a wax infill on engraved items to provide a high colour contrast. For this cat image I achieved the same effect using acrylic paint instead. The process is relatively simple, the acrylic was engraved and cut with the protective layer still on the sheet. The engraving was done through the cover which left some texture in the dent. The whole thing was painted black afterwards and when the paint had dried I peeled off the protective layer, essentially making my own stencil for the item I had just cut. It's a rather effective technique I'm sure you'll agree. ( svg here )
Read more
More posts