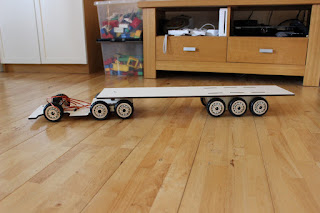 Way back in February, Dawn  had the idea of making a cake based lorry in the same style as the Cake cars we're been doing. It was a great idea but I knew to shift all of the additional weight of a trailer we were going to need four driving wheels and motors. The majority of the weight would be spread over the rear of the trailer so those wheels and axles were put in place with bearings to reduce the rolling resistance. The pivot point was again made with a bearing to ease turning friction. Other minor changes included a reversing beeper and a second set of brake lights on the trailer itself (with curly cable between cab and trailer). The whole thing worked well for this quick demonstration. The problems came when I loaded the trailer down with any weight. I ran my tests using 10kg of weight which the cab was able to pull but the steering was totally ineffective. All the weight was pushed into the drive wheels making the steering light, the sheer power of the four moto
Read more

The right tools for the job 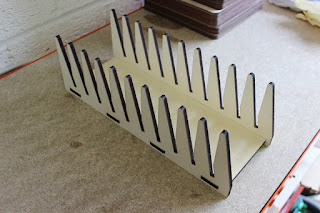 My Kickstarter puzzles  all need to be dyed and oiled before I can put the final assembly together. Obviously they can't be stacked up while they're drying so making a drying rack to store all the sheets without touching each other seemed to be a sensible idea. The whole thing was coated with some spray lacquer to stop the burnt edges of the rack marking the sheets. The whole thing works just as intended. Another tool for the job was made without going anywhere near the laser and it's as simple as a stack of wood. A dozen planks of ply were cut to each hold a single puzzle and it's pieces. The front panel of the puzzle gets glued to the back panel and the whole thing is put on the bottom of the stack. The weight of the boards, stiffness of 12mm ply plus some extra weights from my screw boxes hold all the puzzles perfectly flat while the glue dries. When the puzzle comes out of the top of the stack it's ready for it's paper coating and it can then go
Read more
More posts