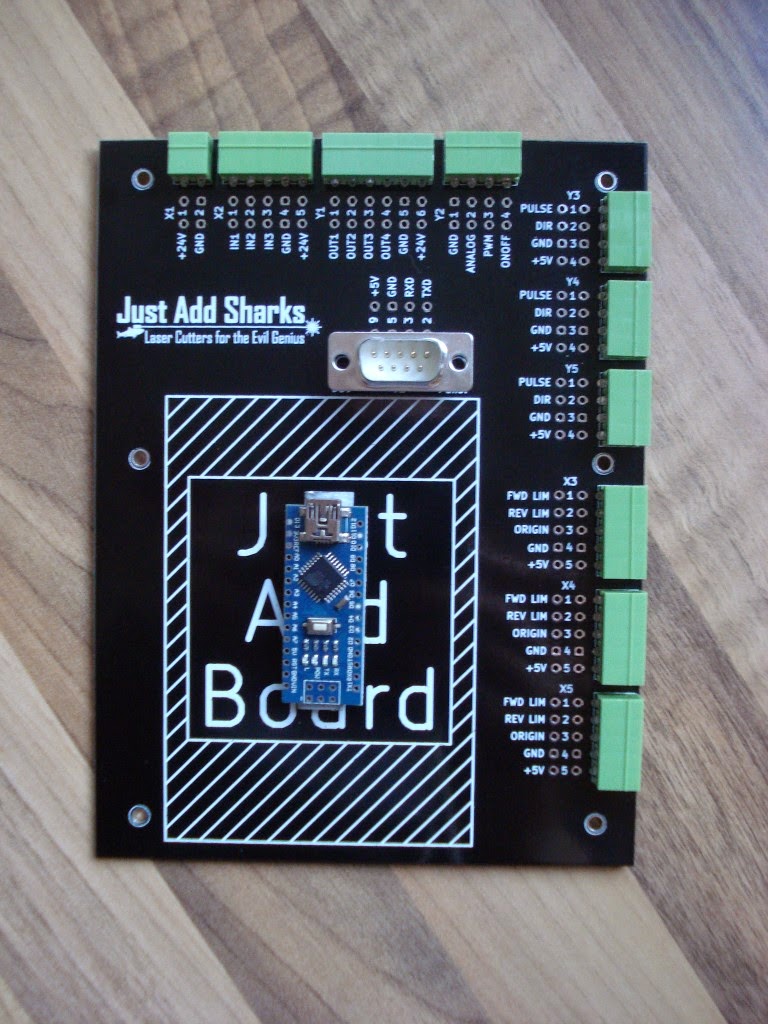 Now that I have an easy way to switch controllers into my laser it's time to try out some of the different softwares. I'm quite comfortable with Arduino and I've got a fair few of them kicking round my house so that's a good place to start so GRBL is the first controller that sprang to mind. It's a simple G-Code interpreter and there are a myriad of programs that send G-Code out via a serial port.
The controller: GRBL is optimised for the AVR328 microcontroller which is typically found in the Arduino Uno so it's very accessible for beginners. The same chip can also be found on the Arduino Nano which can be bought for as little as £2.50 each (which is why I have a box full) so I used one of these instead. The wiring for the blacknose is very simple, There are only X and Y axis, X and Y limit switches, laser power and laser On/Off. GRBL connections are well documented but it's worth noting that I used the Lasermode variant of GRBL which has the Laser Power on…
Read more 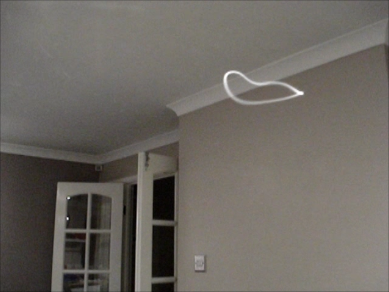 I've known about this effect for quite some time but since I had the lid off my laser cutter and I could video easily I thought now was a good time to share. When you're testing the alignment of the laser you cover the mirror with some masking tape and shoot the beam at it. The first shot burns a dot on the tape but subsequent shots increase the dot size, in essence burning a ring around the centre. This ring of burning turns into a ring of smoke which gently rolls upwards from the masking tape. Repeatedly shooting the tape eventually burns through it which may cause damage to your mirror but I did at least manage to capture a few on video. 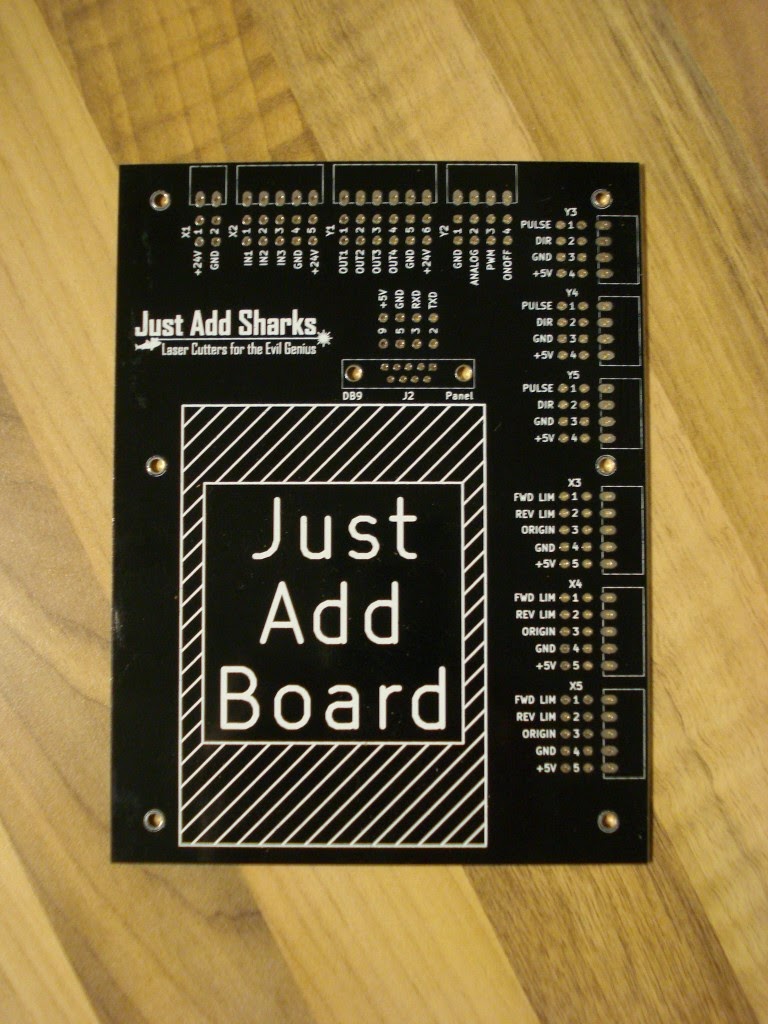 I want to get involved with the open source laser cutter movements but there are a few hoops to jump through first. I can't really afford to have my laser cutter out of action for any length of time and with so many offerings I'm not entirely sure which system to use, there are a wide range of options and I'm not sure which one is the best so I'll want to try them all. It all leads to this logical first step.
I needed an easy way to switch controllers in and out of my existing systems so I enlisted some help from James who turn my vision into an appropriate schematic and pcb which we sent off to Elecrow for manufacturing. When the boards came back they look absolutely fantastic, black boards and white silk screen really tie into the colour scheme for Just Add Sharks.
The principle is simple; the board mimics the Leetro controller, all of the connectors sit in the same places and their functions are clearly marked on the silkscreen. Each connector is exposed with 2 pla…
Read more

Say it with wooden flowers 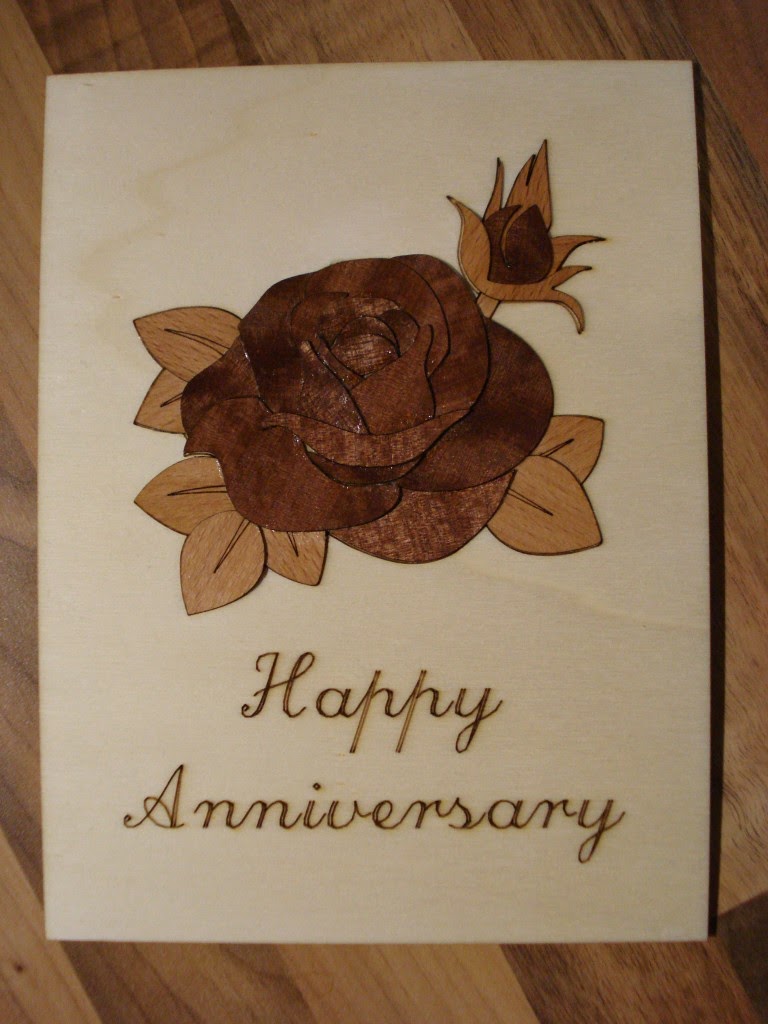 I've been married for 7 years this week and I wanted to make something nice for my very understanding wife. I've had this layered veneer rose planned for some time and I'm pleased with the way it came out. The veneers warped quite badly once glued so you definitely need to have the clamps handy during assembly. If I were making it again I would have bigger overlaps to make it easier (svg here) 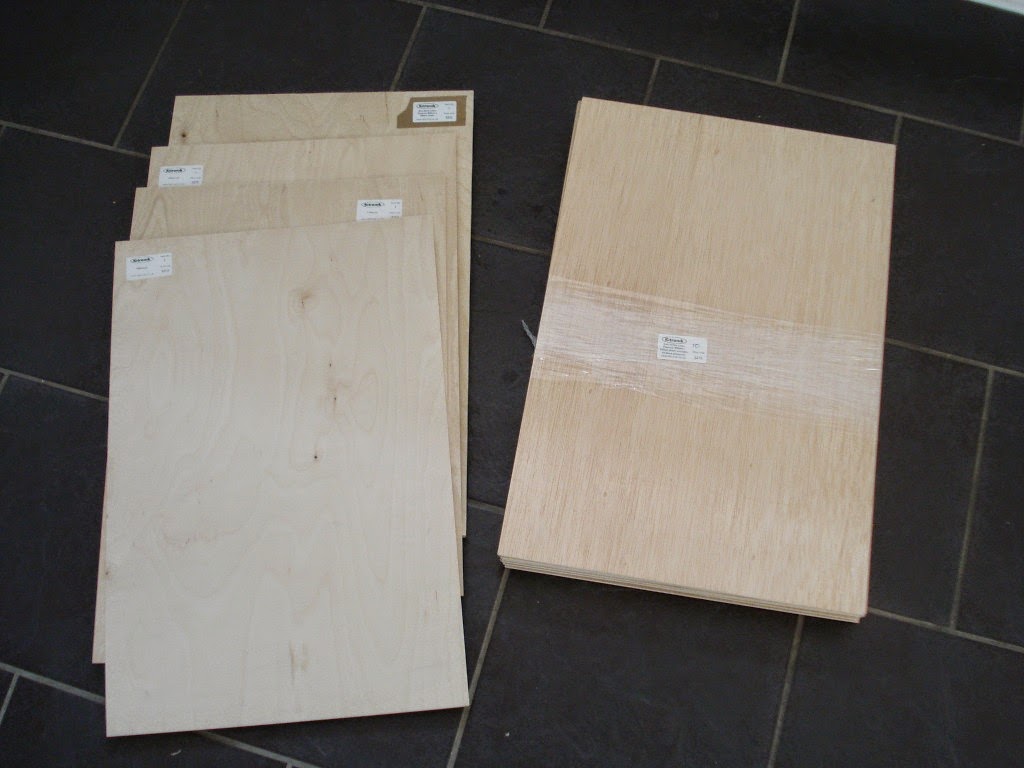 I shy away from Birch plywood, it's more dense than the poplar I love so it's useful for more structural things but it cuts slower so I tend to build strength into my designs. Kevin from Kitronik was telling me about their new supplier and how nice the new material was. So I bought some 0.8mm, 1.5mm, 2mm, 3mm and 6mm and I'm extremely impressed with all of it.

The last batch of birch I bought was fairly rough on the surface but it also had a fair number of voids and knots in it. Every time the laser hits one of these it doesn't cut cleanly and you have one of two choices, you can spend just as long freeing the thing up by hand afterwards or you can turn the power up and re cut it. Kitronik has really grasped the idea that quality is essential for laser cutting, I would happily pay a little bit more for quality wood that cuts first time because it's going to cost far more if I have to do it a second time. The best part of it all is that the high quality wood from K…
Read more 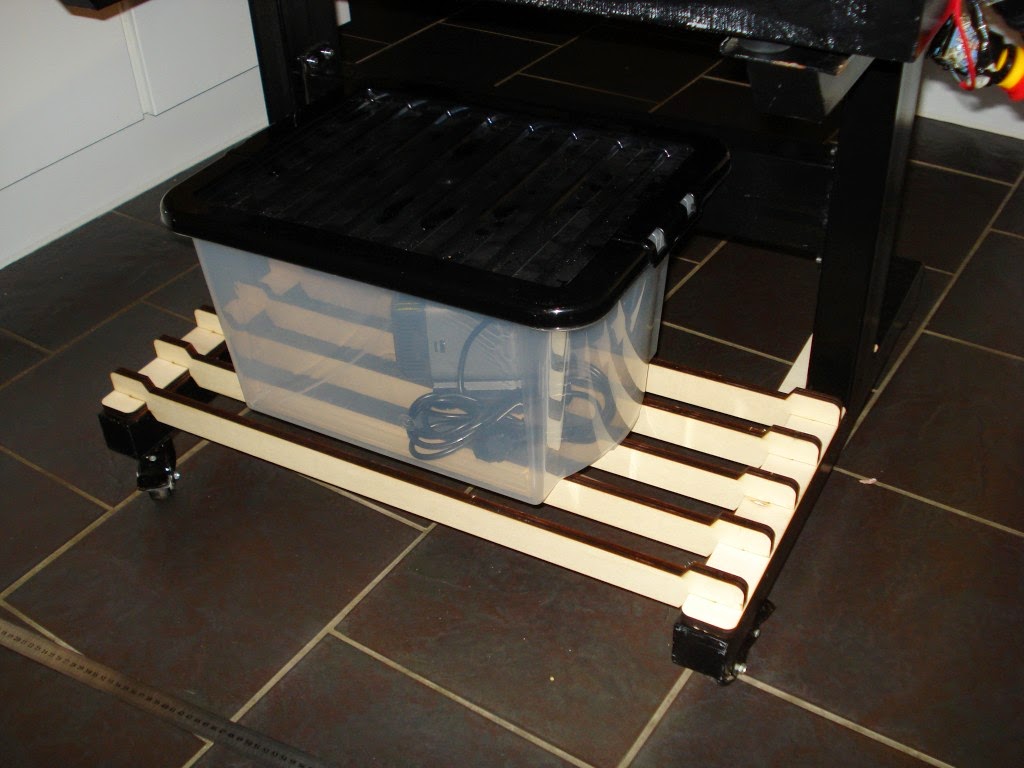 In its basic configuration the Blacknose Laser cutter comes with a water pump and a 35L tub to put water in. I find myself moving my laser around quite a lot (especially while it is in the kitchen/utility room) and it is a pain to move a full tub and the work stand so I laser cut myself a frame to hold the tub onto the work stand. This frame is made from 12mm poplar and requires no glue to keep it together. The two horizontal pieces hook round the vertical legs and stop the frame from sliding off, it also spaces out the vertical slats. The slats have a slight dent in them which stops the tub slipping off the sides of the work stand. 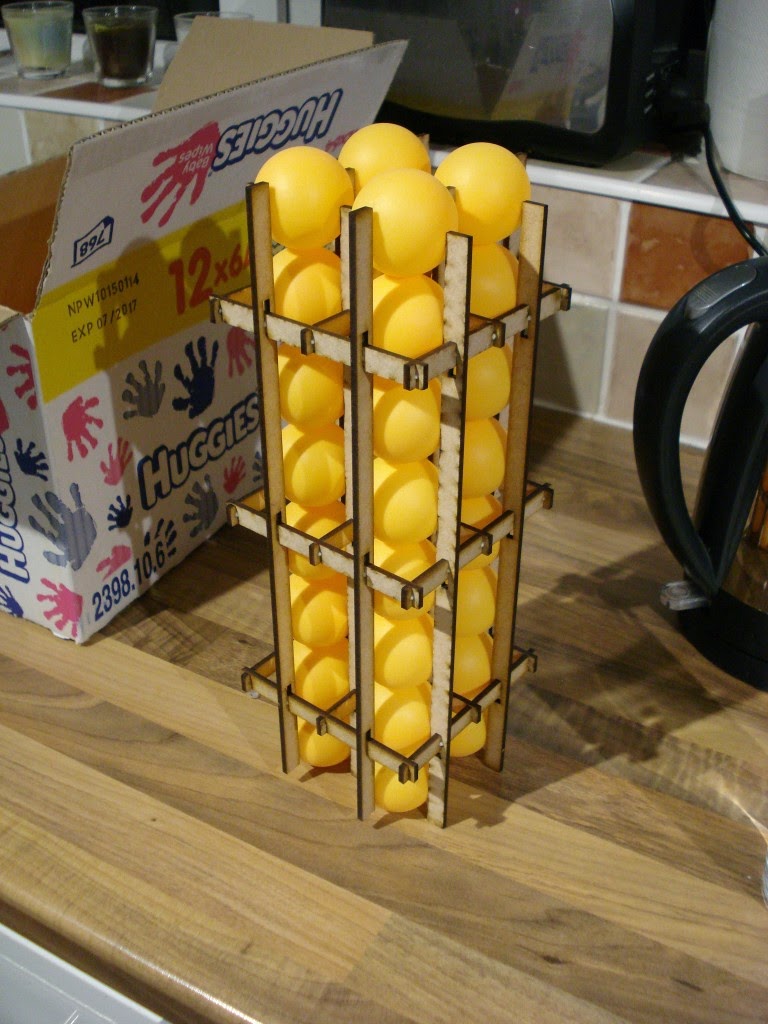 An open challenge has been set for the UK Maker Faire this year. Titled the Mega Fun UK Lasercut Challenge (@MFUKLC) the goal is to fire as many ping pong balls as possible at a target in a 30 second time frame.

Well the challenge has been set and busy or not there is no real way we can ignore it so I've had to get my thinking cap on. The competition states that we're only allowed to use an A0 sheet of material which means optimising all the parts to use the smallest amount of material possible. This is a first attempt at a ball hopper, my current launcher design has a lot of capacity but relies on a steady feed of balls so the hopper must hold as many balls as possible and allow them all out in an orderly fashion. This design is easily extendible to include as many rows/columns as required (svg here)