- August 24, 2013
So I'm in a bit of a funk about Project 52 . At the last count I was 34 for 43  and I'm starting to feel a long way behind. I'm sure the 365 project got to a similar state but with each item taking only a few hours to make it felt like much smaller steps to make. For anyone just tuning in, for Project 365 I made 365 items in 365 days. It's the same as one a day except no one complains if you don't post anything for a week. I felt it was a great success, it pushed my creativity and you can see how much my work improved by just comparing the early items to the last items . This year I decided to cut 52 things in 52 weeks. I've since come to define a 'weekly' thing as anything that takes more than 10 hours to complete. I figure for most people this would be achievable as 2 hours a night over 5 nights. I've fallen behind, I've got 18 projects left to do (180 hours work minimum) and 9 weeks left to do it in. But to put this in context I'm sti
Read more 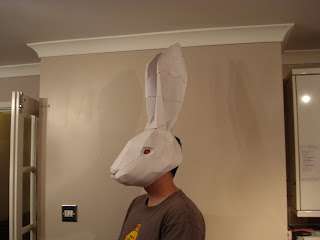 I had to make this one twice as the first one wasn't actually big enough for my head. It's the same deal as the last head , pepakurad 3D model of a rabbit. They take so long to cut and assemble even with a fancy laser, that's what makes them good weekly projects. ( svg here )  34 Projects/43 Weeks
Read more 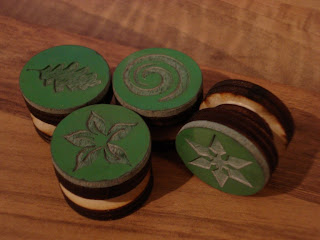 To go with the wooden boxes of yesterday, Jordan also wanted some wooden stamps so they can put their mark on other things. I'm using the Eco laser friendly rubber from Hobbarts. It sits in the middle of their price range but actually doesn't smell any worse than the low odour stuff. It's a big thumbs up from me.
Read more 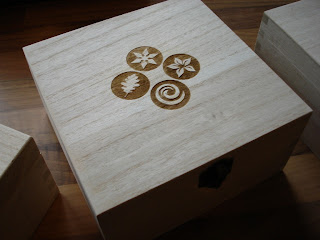 I actually had minimal involvement in this one, Jordan sent me the image that he wanted engraving in the top of the boxes, he sourced the boxes and he paid for them and had them sent to my house. All I really did was set up the laser and put the boxes through the machine. They look awesome though, I also know where the boxes came from so I shall be engraving more of these in the near future.
Read more
More posts