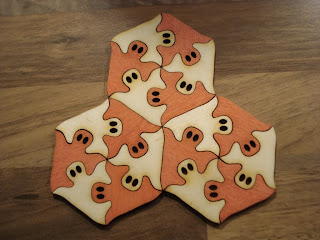 These tessellating ghosts appear to have been designed by Mike Maloney . I redrew and recreated them as a series of interlocking tiles by third party request.
Read more

Something Beautiful by Sam Lauren Smith 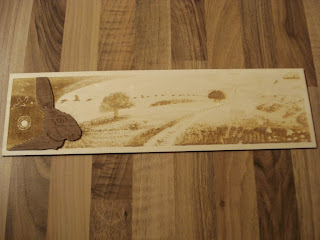 I'm stuck making stock for the Derby Maker Faire next week but I'd much rather be designing and making new and shiny things. We attended a local craft faire at the weekend and I saw this beautiful image on a greeting card drawn by Sam Lauren Smith . Most of her new 'inky' work would be ideal for translation to the laser cutter. This could have done with being a bit darker but I'll have time to correct it in the future, in the meantime I just wanted to share this because there's been a lack of making new things recently.
Read more 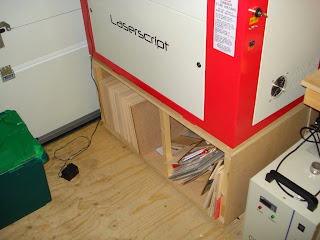 I've been on holiday :) It was nice to get a week away. Before I left I'd managed to get the new cabinet built but as the laser is so heavy I couldn't move it on my own. I conned some friends into moving it at the weekend. It's not perfect because the chiller doesn't fit in the space but it can remain next to the frame like it did before, the extra storage holds full sheets of material and is great for purpose, a definite improvement on the old frame and the laser doesn't wobbly alarmingly during operation. I've also been making a few other improvements. The led lights in the lid were held in with hot glue, eventually that lost it's hold and they were gaffa taped down, that gave eventually too. I finally got round to cutting some plastic mounts that hold the lights down and fix into the screws on the lid. I also flipped the front led's into the lid so they point down with the lid is open and negate some of the blinding effects and I was abl
Read more
More posts