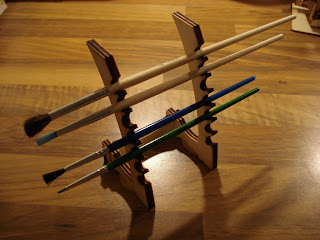 Another request, one of the reward levels for a kickstarter paintbrush project  was a samurai style paintbrush stand . They're not available for purchase yet and this one is required before they will make it to the shops so I was asked if I could laser something suitably similar. I came up with this version that clicks together to hold it in place, but is otherwise the same. I'm now off to cut it in 6mm walnut. ( svg here )
Read more 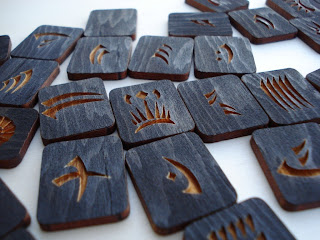 I've been offering to make these rune sets  with a colour wash for some time but someone finally took me up on the offer last week. I washed some spruce wood with black acrylic and then etched. The insides come up almost orange compared to the blackness of the surface, I'm pleased with the results and hopefully he will be too. (I also have a second set if anyone is interested)
Read more 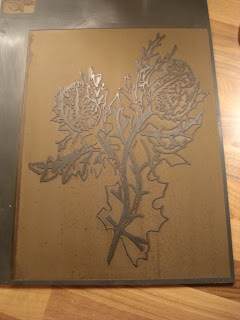 I was asked to cut some stencils for someone through Derby Hackspace. The design didn't lend itself well to stencils, too many islands, but it should be fine with a stamp or print. I had a quick look to see what other people had done and a few guys suggested Lino was fine under the laser. I was sent a few sheets to try and the results are pretty good. As with the previous rubber stamps the surface gets covered in a fine powder of vaporised materials... or so I thought when I came to hoover it up it turned out to be quite sticky. The tar had spread across most of the inside of the laser and it required some pretty serious cleaning before I could cut the next items. Lino is a definite no for me from now onwards. The project is still going ahead but now with Laser rubber so I'll post that up when done.
Read more 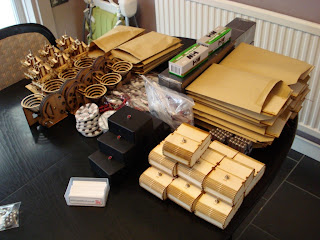 Saturday saw me heading to London for the Elephant and Castle mini maker faire. I woke up at 4.30am, got ready to go and was out the door by 5, a quick 2 hour jaunt down the motorway and I met Dominic at a tube station in North London. Some crazy driving across town, not helped by road closures but certainly helped by the lack of other traffic at 7am, and we arrived at the maker faire early enough to get one of the free parking spaces on the side of the road (score!). It was a good day out, nice to see some of the same faces and good to talk to new public. The doors opened to the public at 10am and it was pretty much non stop all day. I took a selection of laser cut items, some of my kits in assembled and kit form, and enough gear for anybody to actually assemble the kits on the stall. I managed to sell all of my marble machine and useless machine kits, but none of my assembled items so if you want something pre-built then now is the time to ask. The doors closed at 5, I w
Read more
More posts