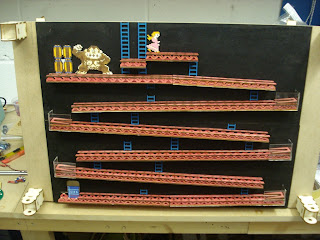 So even though DK isn't going to the maker faire and I have a million other things to be working on before the maker faire I just can't help but make a few more tweaks and changes to the machine. This week I managed to make all the ladders and girders for the new DK, I also redrew all the sprites (because the new style just needs pixel outlines rather than cuts) and I assembled them onto the back boards. I laser cut some perspex windows and heat bent them through 90 degrees to catch the balls as they drop, and (because this version is closer to the original game in terms of girder angles) I had to add an additional little slope section to ensure that the balls change direction quickly but also manage to roll all the way down to the bottom window. (no specific file yet) 22 Projects/ 26 Weeks
Read more 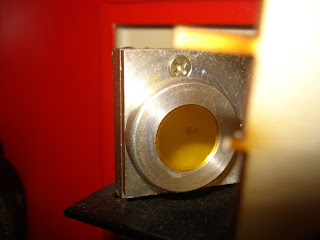 I've been cursing my laser a bit recently because it's been behaving badly. I can't decide if the tube is on the way out or if it's just because the outside temperature has suddenly heated up significantly. I took another look to make sure that the mirrors and lenses were clean and I discovered this visible smut on one of the mirrors. I know it wasn't there last time I cleaned the mirror and it won't rub off which makes me think that the mirror itself might be damaged now. I hope to hear something from HPC in the morning.
Read more 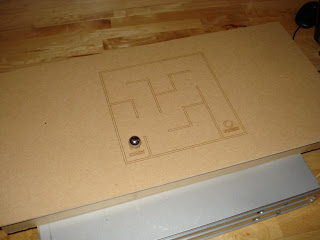 With the UK Maker Faire just days away I had to concede and cut my loses. Donkey Kong just wasn't going to be finished in time and to an acceptable standard, so I had to make the decision not to take it as a half built project to the Maker Faire. I still want to take something interactive though so I needed to make a new project. The new project is a CNC controlled ball bearing rolling round a maze. The XY frame is taken from my old 3020 (the one that caught fire) and is driven by some hefty stepper drivers from my old CNC mill. A couple of magnets are placed on top of the machine and a ball bearing on top of a sheet of mdf. Sure it's only a flat maze but there is a reason for that, the whole thing is driven from an arduino and I'm going to let people program the arduino to drive it round the maze. I wrote a small application that converts a command string sent via the serial port into a series of movements. N10, E20 etc. Simple enough to pick up quickly. Multipl
Read more
More posts