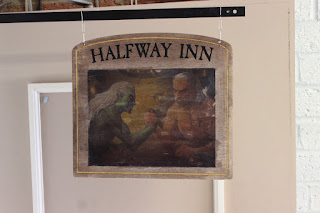 I really wish I had more photos of this. I made a sign for a bar that we ran at Vale, we set up a bar right in the middle of the quarry (hence the crates  for moving beer). All good pubs need a sign and ours was no exception. The lettering and outline were coloured using paints, the areas were masked before cutting to allow a neat paint job. The picture itself was transferred to the wood from a colour printout. There are lots of online tutorial that suggest all sorts of glue to use. The gist is that you print out onto a sheet, cover the whole thing in glue and stick it ink side down onto the wood. Once it has dried, you then wet the paper and slowly rub it off of the ink. The trouble is there is a very fine balance between not rubbing enough paper off and rubbing the ink off. In this case the blemishes work well with the style.
Read more 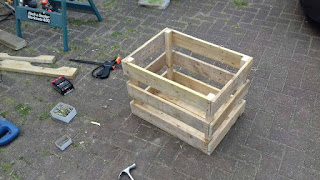 I have a lot of green plastic crates but I wanted something a little more rustic for events. I re purposed some pallets I acquired from the local industrial estate and turned them into these simple boxes. I put some small feet on the bottom that allow them to stack inside each other and they don't immediately slip off the trolley when you move them around. Not laser cut but I do rather enjoy my new mitre saw and it makes chopping planks so much easier.
Read more 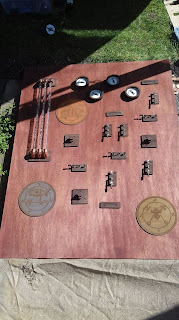 The culmination of knobs , dials , bubble rods and seals  were these two new panels to go into the machine at vale.The first panel has all the input devices, when each lever is flipped or slider moved then all the LED's built into the board change colour, the rods change flash rates and the dials also move. Nothing specific just general interaction to indicate that something has changed. The second board is very much like my Stranger Things messaging systems. The board has 50 leds built into it and they have been shuffled to display letters at random (even I don't know which LED is which letter). You can connect to the board via wifi and use it to send messages back from the machine to the players. It was used last event but I wasn't there to see if it was successful, I hope it went ok.
Read more 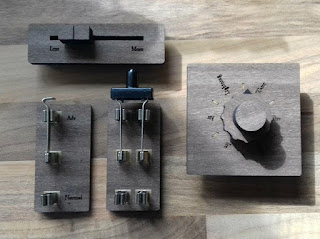 I made a collection of dial and switches for Vale at the start of the year. I've done similar things before  but this time they're all functional. The plan was to put them all onto a board and allow people to actually interact with the infernal machine this year.
Read more
More posts