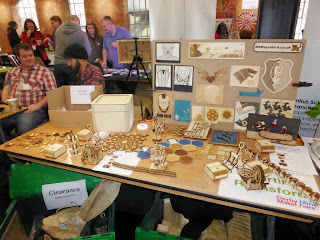 First of all I'd like to say hi to any new readers now following me after the Derby Mini Maker Faire at the weekend. I had a great time talking to everyone, I always forget to take photos of my stall so hopefully some will surface soon (and so they did, a friend just sent me the above pic).

I realise it's been just over a week since my last post and my productivity is down in general. Most of last week I was building up stock for the maker faire but I suffered quite a blow when my laser tube burned out, I'm now waiting on a replacement to arrive. The one small advantage to not selling much at the weekend is that I now have enough stock to tide me over. Once it's functional again I have a small backlog to clear as well as some commission work to do so it's going to stay quiet round here for a wee bit longer.

In more exciting news though I have been making the most of the downtime. I have 2 new large projects (not laser cut) that I've been working on for quite s…
Read more
More posts