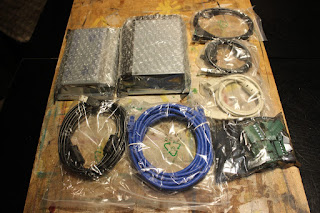 The internal USB cable is Type B plug to Type A socket which means you need a Type A plug to Type A plug between the laser and the PC. This is a personal bug bear as A to A cables are not advisable in the USB standard and can be looped back into itself in a USB hub and cause electrical problems, but it appears to be a fairly common laser connection. My laser only has one USB hole currently cut into the case so I'll be using it for the USB storage connection and temporarily connecting straight from my laptop to the laser using a 3m A to B cable (the same as it currently does). I'll buy a B to B extension when I get round to cutting out more holes and ultimately I'll be using the Ethernet anyway. 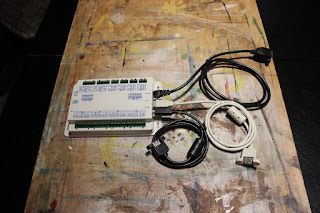 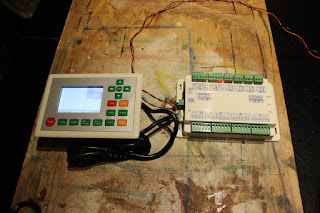 As mentioned previously it's a busy time of year and I wanted to minimise disruption to my workhorse laser so I found a separate 24V power supply and connected the controller and display on my workbench. This allows me to communicate to the controller, through the USB, from my laptop so I can configure the system before I connect it to my laser. Because this is a machine upgrade I already have the machine settings in my Leetro configuration files, it's just a matter of matching the two things up.

The X axis settings are the easiest place to start.
The other settings may not exactly have direct equivalents but the figures can at least be used for guidance. The Ruida controller splits into two sets of speeds and accelerations, these are for when the machine is doing work or for when it's being driven manually, in which case it can be a little faster and less accurate.

The Y axis settings are going to be very similar to the X axis, on the Leetro controller they share the same values. I've taken the liberty of setting up X and Y slightly different on the Ruida. The Y axis has more mass because it has to move the X axis around, I have set the maximum speed and acceleration to closer to the original values.

The Z axis has similar settings to the other axis but much slower, the Z motors have to move the entire bed up and down so can't achieve the same top speeds. The Z axis on my old machine has always been quite clunky and jumpy so I'll take this opportunity to adjust the values. The acceleration values on the Leetro controller don't really add up anyway, if you hold the keypad down the laser moves into a fast speed
Empirically these changes to the Z axis make it seem a little slow but if I use Lightburn to drive the Z axis I can specify a distance to go. I'll only be using the keys to go up and down short distances while I manually focus the laser and I can use the Lightburn controls to go down further if I want to engrave on the top of a box. 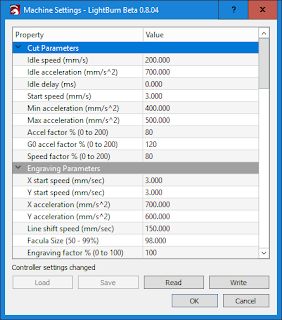 Lasercut 5.3 has settings for cut and engrave parameters but they don't really match the Ruida settings. They refer to things like corner acceleration and ranges of engraving accelerations. The Ruida settings appear to be much simpler but I assume the controller works out the more complex values from these simple inputs. I took these settings from the previous X and Y settings and a combination of the default values.

That's as far as it goes for setting up the controller without attaching it to the machine. There were a few other changes that needed to be made once it was connected to the machine but at this stage the controller is ready to be attached to the laser cutter. In my next blog post I'll talk about wiring this thing up to the the machine and occupying the place of the Leetro controller.
Laser cutter Lightburn