A while back I found myself on one of Dinkydoodle Designs cake course where I made a moving BB9 cake, it taught me a lot about the cake making process and I used a lot of that knowledge in making this new Toothless Dragon cake. The electronic parts are simply a servo, arduino, neopixels and a sound recorder, all fairly common parts but I learned a lot making/baking my own cake. 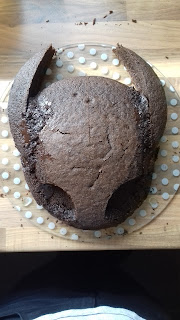 A 9 inch round cake was baked, cut and modified to form the basic shape required. Two crescent shapes were cut and moved up to form horns, the two eye sockets were added to the cheeks to pad them out a bit. 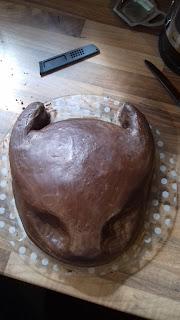 The cake was covered in chocolate ganache to smooth out the lumps and bumps and firm the design up. Larger dollops of ganache further filled the gaps between the horns and the head. 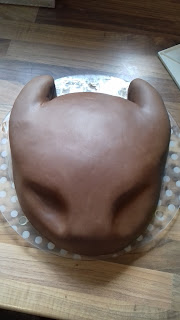 Chocolate Silk sugarpaste was used to cover the whole cake. A large rolled sheet was stretched into place, smoothed and trimmed down to the board. 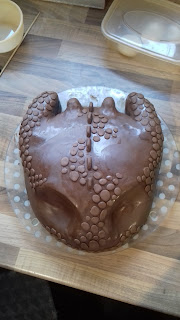 Details were added using rolled up balls of sugarpaste as scales and modelling tools for dimples and nostril details. This part of the cake stops at the top lip so I didn't need to worry about adding a mouth. 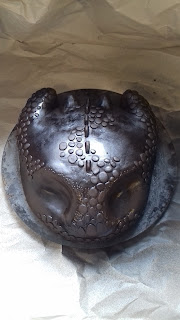 The whole cake was sprayed black. I used a water based airbrush paint but I'm informed an ethanol based colour would have gone on better and dried faster. It did suffer from a little beading on the surface but that all kind of added to the dragon skin texture. 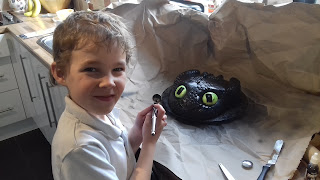 The eyes were inserted into the cake at this point, made from white sugarpaste, they were painted green with a brush to deliberately add converging streaks. The black iris was sprayed on top using a hastily made stencil and the shiny spot made by masking off a tiny square before doing that. 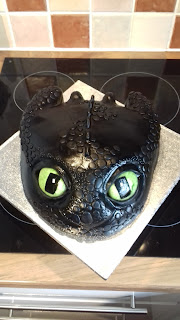 Eye lids were added over the top of the eyeballs and the whole thing touched up with more black spray. There was a little over spatter from my poor painting skills and some black streaks up the eyeballs from the paint brush but they all added to the details on each eye. 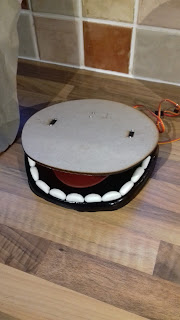 A lower jaw, row of teach and tongue were formed onto the moving base plate for the whole cake. An adafruit neopixel stick was placed into the back of the mouth to illuminate the mouth when it was opened. 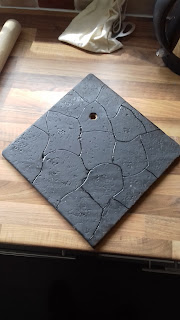 A 12 inch board was covered with more sugar paste and effort was made to make it look like paving or a rock formation. 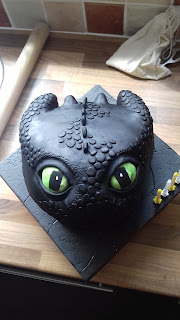 The Toothless head and jaw mechanism were added on top of the board, the mains power supply and Arduino were hidden in a cardboard box under the board, which tidied the whole thing up somewhat.
Hazel absolutely loved it and it went down very well at her party this weekend. The death by chocolate cake is very tasty.