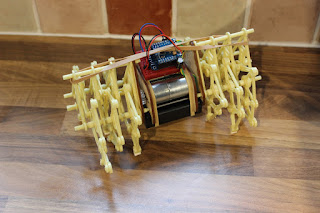 The remote control strandbeest have been available in the webstore for some time now, I had them on display at Maker Central and at one point I dropped one onto the floor to try and catch up with Matt Denton. It was was close but ultimately just too slow to make any sensible progress so I thought it would be a fun project to beef up the drive motors and make a one off machine that moves at a sensible pace.

I had a suitable motor driver chip that interfaces neatly with the wemos D1 controller I'm using, it's able to output an amp to drive some sensible sized motors. I found some 1000 rpm motors that fit neatly inside the space available, wired them all up and adjusted the code to use the motor driver chip instead of the servo motors. The trouble is that the motors run too fast, the joints on the legs of the plastic kit shake themselves loose as it moves. It probably moved about 50% faster than the servo version but it still doesn't feel fast enough. I need to figure out how to make the linkages stay together before I can turn up the pace but it's a good start for now. 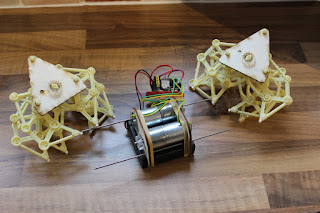 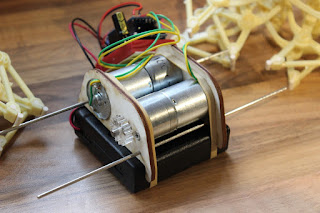