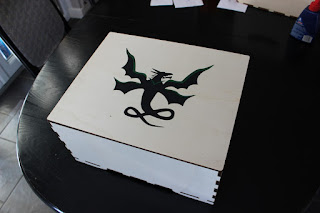 Another custom Vale treasure chest. I like to make them all slightly different because it's still not a massive game and these boxes are likely to be in similar places at similar times. If they were identical it would be really obvious. This one has internal storage trays, utilising some of the space above the smaller resources. The trays secure into place with little dimples to stop them from sliding around on the shelf. There is the usual hidden compartment under the shorter trays too. This is the smallest box so far and has the most space so I'm quite pleased with it.

The lid is cut from two sheets of 3mm poplar, the dragon pieces were removed and painted before being reinserted onto the top layer. There are fine dragon details carved into the black areas using a low power cut, it's hard to see in the pictures but they're definitely noticeable on the lid. 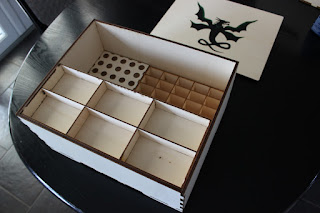 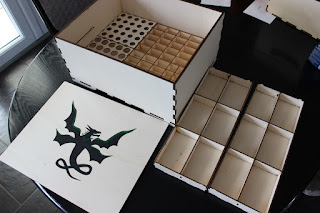