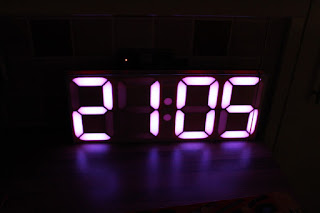 I made a large countdown clock for a LRP event last year, once the event was over however there aren't a lot of uses for a 99 minute countdown. I offered to put in some additional functionality and turn it into a real clock using an RTC chip. These DS3231 are super cheap anyway and I probably should have included it first time around. The second issue was that the tape I used to diffuse the lights had absorbed some moisture and gone horribly wrinkled. Once the RTC was installed I ended up replacing the front cover with some Mylar stencil material which is damp proof but clearly doesn't do as well at diffusing the light. 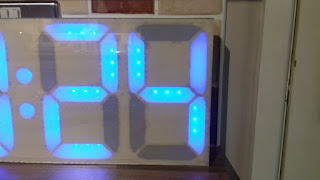 Internal to the clock I laser cut some packing foam in the shape of the 7 segments and inserted those into the gaps for the digits. This did a much better job at diffusing the light and made the whole thing functional again. The RTC is battery backed and should hold it's time for a while, it's currently reset by programming on the Arduino IDE but as the main controller is a wemos D1 I suppose I should set it up to access an NTP server from the wifi instead. 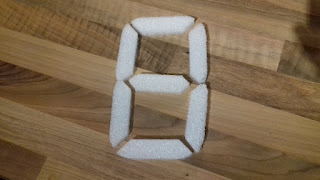 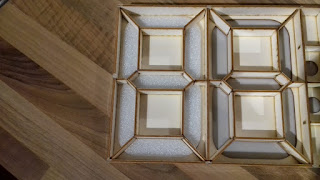 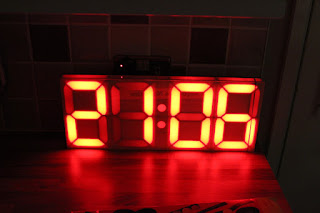 The previous spinner didn't spin as well as I wanted so I went off to think about how I would do it differently if I had to do it again. Taking inspiration from the various fidget spinners out there I came up with this alternate design. Instead of spinning a super light arrow, this one spins the whole wheel (again using a bearing). It's a standard 3mm poplar arrangement for the wheel and the arrows but the secret sauce is a 4mm thick, 4mm diameter, insert between the arrows, going through the bearing. It spins a lot more freely and this is definitely a better way of doing it. The attachment to the arrows is a bit weak though and it would probably be better with a 4mm diameter dowel going through all three layers (svg here) 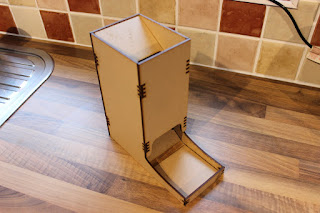