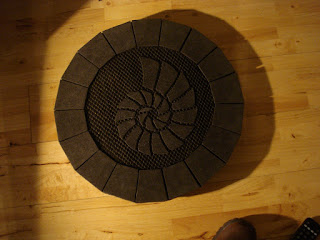 Some of you may already be aware that I 'LARP' as one of my hobbies, it was even briefly mentioned on the Make magazine blog. There is a new game starting this year, Empire LRP, which promises to be one of the largest fest events ever seen in the UK with record numbers of pre books and untold numbers turning up on the gate. Anyway I digress, a new game means new weapons for my character.

I had done a quick test with Plastazote before so I was aware that you could cut it with the laser but now I had the opportunity to make something I actually needed. I drew up some quick sketches for a shield and came up with this design, cutting each scale out individually is not something you would ever bother doing by hand so it fits a criteria of being unique. The shell logo identifies the group and the rest of the shield is a standard construction. (files lost)
13 projects/ 22 weeks 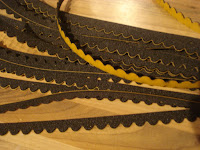 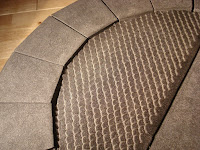 The scales were cut as wavy strips and then overlapped onto the front of the shield. I've done some scales before and I wish I'd remembered that as I think I prefer those. The principle is the same though, a row of scales is held together under the overlap so you can put in whole rows at once. The shell detail was cut from the sheet and then the remainder of the sheet used to align it onto the shield while gluing.

Being the first attempt I did this the hard way. The thin sheet of plastazote curls on the laser bed so I held it down with magnets, moving the magnets round to do each row of scales. Time is money though and a much better way would have been to place a 2mm sheet of laser mdf over the plastazote to weigh the whole thing down and then cut through the mdf and the scales. You'll end up with sheets of mdf scales that would find a home somewhere else (I already have a project in mind), it costs 90p for the sheet and easily saves an hour of messing around so worth it in the end. 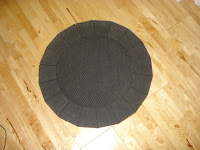 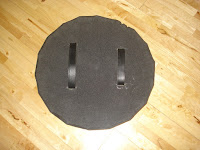 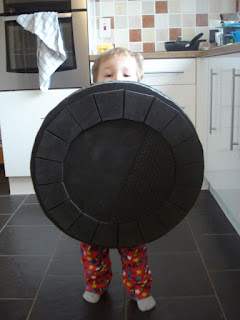