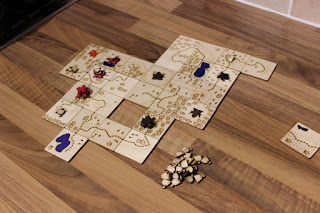 According to the files on this project I started it 24 months ago and I haven't touched it for 9 months, I'm not sure why it never made it to the blog because it took long enough. This is a Eurogame based upon the Vale LRP game. Players assume the role of the Duke or the Kahn and take it in turns to move meeples around the board searching for resource nodes and collecting the resource bags that spawn upon them. (svg here) 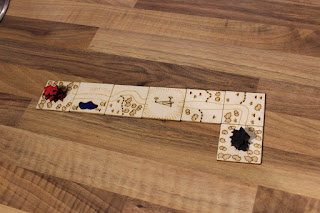 The game starts by seeding the gaming area with a path between 2 camps. From the 'Dukes' camp 2 or 3 tiles are laid, then the ritual site and the same number of tiles are laid before the road is ended with the 'Kahns' camp. A number of paths lead off of the main road, these will be exploration areas for the meeples. 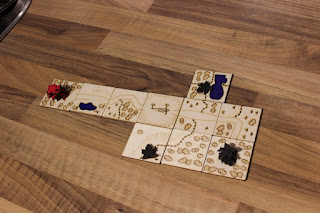 During a turn a player may move all of their meeples 1 space around the board. They can be moved separately or as a stack to speed up game play. As a meeple moves along a path into an empty space the player draws a tile from the bag and places it onto the play area. The tile must fit into the space exactly, aligning with the existing tiles. If a tile does not fit it is discarded and a new tile redrawn. Players should probably alternate the drawing of tiles to help/hinder the meeples doing the exploration.

Players are aiming to locate the position of resource nodes along the paths. When these nodes are discovered 3 bags of resources automagically spawn upon the node. The meeples should collect these bags and return them to base camp. Meeples may carry up to 2 bags of resources at the same time. The winner is the player who gets the most of these resource bags in their camp.

Whenever a new node is discovered all the previous nodes spawn new resources. Resources remain on the node until they are collected by a meeple. 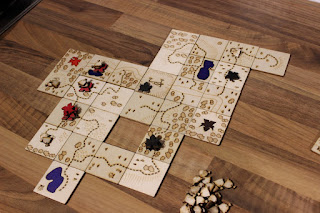 When the meeples meet each other on the same path conflict between the meeples occurs, the player with the largest stack of meeples wins. The losing side is forced to drop all of their resources and the winning player allocates a new tile (on the path) to move the losing stack towards. Players may not cause conflict unless they have the larger stack of meeples. If the conflict occurs in a dead end path, the loosing meeples 'die' and return to their base camp to start again.

The game ends when all possible routes have been explored OR all 8 nodes have been discovered AND all resources have been returned to base. This is usually done with an amicable agreement to divvy up the remaining resources thus avoiding lots of tedious stack movements. Because of the tile drawing nature of the game and the random generation of the path the game may end before 8 nodes are discovered.