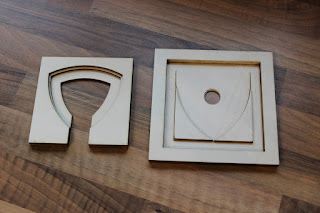 They may not look like a lot but jigs like this can be pivotal to the success of a large project like the 100 coasters I made yesterday. If you're going to be doing anything 100 times it's worth spending a few minutes considering how you can make each step smoother to cut down on assembly time. Here are just a few questions you want to think about and if you answer 'Yes' to any of them you probably want to make yourself a jig. Thankfully the laser cutter is particularly good at making jigs for parts as well as the parts themselves.
These coasters break down into 2 parts of 3 layers each. The inner triangle has a middle layer that is smaller than the outer layers, this means it needs to be aligned perfectly in the centre and because it is on the reverse side of the cutting we can't just draw registration marks. 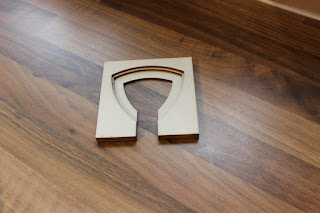 The first jig is designed for gluing the middle layer to one of the outer layers. It is a stepper tray, the smaller piece sits right at the bottom and the larger piece sits on top of it, the two parts are held in position until the glue dries. The glue is applied to the smaller part, this is because we don't want any overflow around the edge of the larger part, applying glue to the smaller side means that it is going to stay between the two pieces. It was easiest to run all these parts together in a single batch of 100, this means the glue will have dried before we try to use the part again in the second jig. 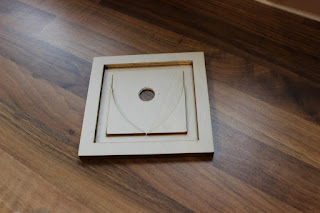 The second jig holds all the pieces for final assembly. The outer square is built up in 3 layers again but the middle layer is thinner this time to allow it to sit in the groove around the edge of the triangle.
The newly glued part is aligned in the middle of the jig by a corresponding 'V' shaped layer, this just squares the piece up and ensures it isn't in the way of the outer layers. Glue is again applied to the narrow bottom layer to glue spillage and the middle layer is installed as 4 separate pieces. These pieces overlap onto the triangle. The top layer is glued down to form the outer frame work and finally the top triangle is glued into place (and aligned by eye) to secure the triangle into the frame. The newly formed coaster can be poked out of the jig using the hole in the bottom. The whole process took about 3 minutes.

Being a Hackaday fan and a laser cutter fan, I've been recommended this article about improved laser cutting many times over already. The idea is simple enough, laminar flow from the cutting nozzle appears to improve cutting performance. They don't provide a 3D model and I'm super busy so I employed my newly retired Dad to create one for me. It's a work in progress and I haven't printed it yet, we did find something very interesting along the way though. My laser cutter has a typically large aquarium pump, it's a bit of a 'puffer' and you can hear the air rushing out of the end of it in puffs, not ideal for laminar flow. Dad suggested a low pressure air reservoir to smooth some of the airflow before it goes into the laser. This really doesn't have to be very complicated and a 2L plastic bottle makes a perfect candidate. I drilled a hole through the cap and the bottom (the two thickest parts of plastic) and wedged the silicon tube into the gaps. The
Read more

I've been working on a new puzzle box going by the name of ' Loki's box of tricks '. Like the previous puzzle box this has needed several new Hershey fonts to speed up the laser cutting. This one was designed to look like Norse runes. While I was going to the effort of tidying up the font it seemed like a good idea to share them all publicly. Hopefully someone will find this useful.  https://github.com/msraynsford/SVGFonts
Read more