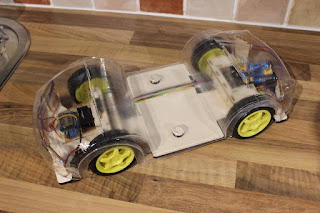 The remote car cakes have a layer of plastic between the cake and the electronics. This needs to be shaped to fit the wheels and provide enough space for actual cake to go onto the car. The vacuum former is the perfect tool for this. I started by taking a mould of an actual toy car about the right size, this ended up being a one shot deal as the toy car melted on the second pull. 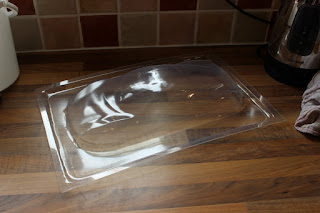 At this point I had a sheet of plastic in roughly the right shape and a strong desire not to mess up a second time so I scrabbled around the garage to see what my options were. I found a bag of plaster of paris and decide that casting the mould was a sensible way forward. 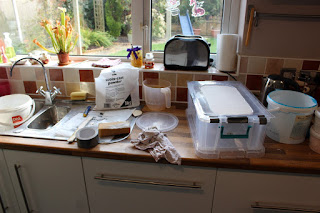 The plaster of paris was cast, the kitchen was turned upside down, nearly every available surface turned into useful space full of junk, at least I had a few hours to tidy things up again. It was all a bit impromptu but good fun. The plaster of paris former was cut into separate parts for the cake. The middle section will become a mould for the cake part of the car, the nose and bonnet will house the electronics. 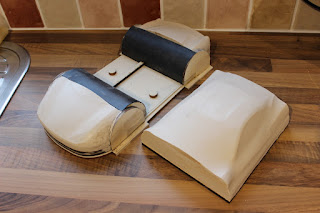 The plaster of paris parts were shaped, padded and mounted upon a base to hold them in the right places. The wheel arches were built up to allow ample room for the wheels. This new mould served well for the first half dozen cars, it was a bit of a struggle to remove the mould after it was formed and it started to show signs of wear which led to a mould rethink but that's for another day. 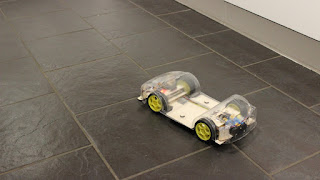