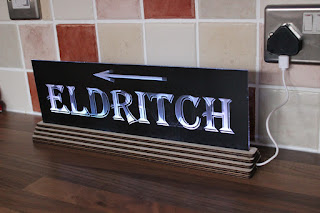 I haven't seen any other double sided edge lit signs before and it's probably with good reason but I think this one came out well enough considering. 'Eldritch' wanted an edge lit sign for an exhibition, arrows on both sides so that it can be pointed towards the stall from either side. Sounds simple enough, their logo is white lettering on black background so the idea was at least workable. I sprayed some clear acrylic sheet black and etched the logo through the paint to make it stand out. The colour contrast is good but you can kind of see the opposite logo on the other side and the arrows didn't quite line up which is always a disappointment. 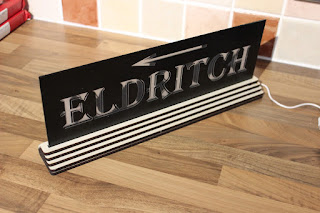 I used a paint can on the sheet for ease and after reading the instructions I used some fine sand paper to key the smooth surfaces of the sheet. The trouble is that this 'frosting' of the sheet absorbs light from the strip and prevents it from reaching the lettering. There is far less internal reflection so the lettering isn't as bright as it could be. I'm sure the black paint also absorbs some of that light too. The base is simple enough, although I made the screw holes too large for the threads and ended up just gluing the base down instead. 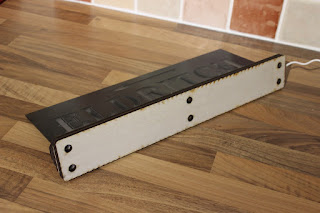 The whole unit is powered from USB, making it simple enough to plug into the wall or to run from a power bank. 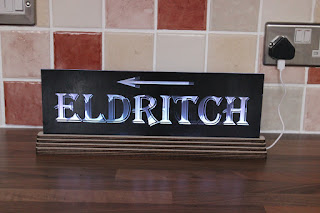