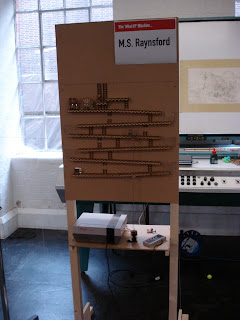 I finally present to you my mechanical donkey kong V1. A simplified version of the original plan due to time constraints this one rotates the Mario, jumps over the balls and operates the feed and catchment mechanisms (those to follow). Made almost entirely from laser cut parts the whole design has a style all of it's own. The machine was a great success and enjoyed by the public, largely reliable with most of the problems being user faults. V2 will be built in slow time after this 365 blog finishes but expect to see it at the UK Maker Faire next year.


Mario Control
Two servos handle the motion of Mario. One turns mario left and right and the other controls the jump.
An arduino reads input from the NES and decides what to do with the servos. Left and right are mapped directly from the pad and the jump mechanism goes up when the 'A' button is pushed and 0.5 seconds later Mario is lowered again. This gives it lots of time to jump cleanly over the barrels. The mechanism has been shown here before. The arduino patches into the back of the NES Pad connector leaving it entirely functional, there are no modifications to the pad itself. 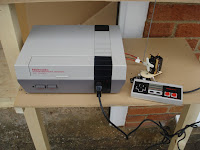 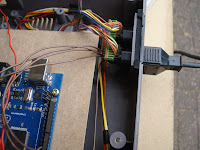 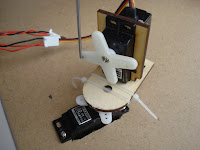 Mario Mount
Mario has to be free to turn left and right, jump up and down and also hold a magnet close enough to the track to stick to the ball bearings at all times. This required a 2 part mount, one piece that doesn't rotate. The mount ended up being 2 parts too, the small black block hides a large magnet and is connected to the stationary part. 2 rods connect to the girder fixing point prevent the podium from rotating with the rest of the Mario. A small magnet in the base of Mario holds him onto the arm as he rotates (can you see Marios nuts?) 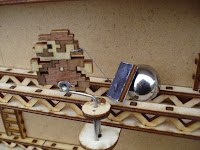 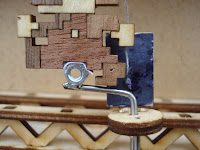 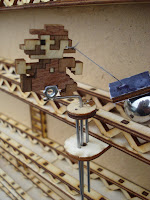 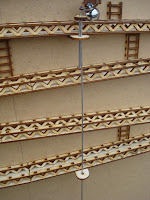 Barrel Feeder
The barrels were replaced with 20mm ball bearings so they roll down the slopes, also being magnetic gave the way to react when Mario fails to jump them. Several iterations of the feeder later I ended up with a tube and a cam at the far end. The cam is shaped to stop the balls from rolling freely down the tube but with a notch to let 1 ball through at a time as it rotates. On top of the motor is a small micro switch which detects a dent on cam. The micro switch keeps the cam rotating for one full turn. A second switch on the girder activates the ball release. This means all the balls have even spacing but it was one of the compromises I had to make for this version. 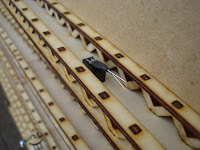 Catchment area
The catchment area holds 12 balls and was intended to provide a lot more mechanical interaction with the barrel feeder. Every 3rd (4th?) ball is directed to the next catchment slot, with the overflow triggering the next release of balls. In the end only the 13th ball triggered the next action (this whole machine was one stage of a giant Rube goldberg machine) 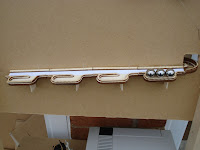 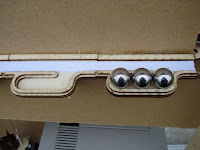 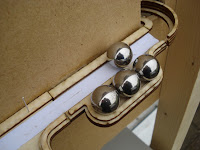 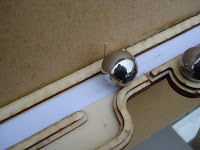 Girder Control
By far one of the trickiest parts was getting the barrels to roll down the girders, because they sit so high on the girders and the drop between them is actually quite large the bearings would just jump straight off the next platform. I installed a clear plastic barrier to guide them down between layers and this still didn't work. The final solution was to get some super strong magnets installed in each girder to pull the bearing down onto the girder. Close enough to draw the bearing in but not so close that it sticks to the magnet. 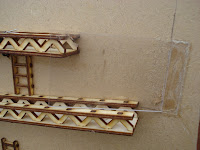 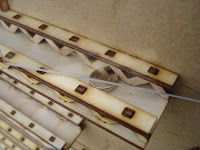 Final touches
The path in and out of the board were created with nice corners to guide the bearing round smoothly, these popped through holes in the backboard to come to and from the feeder/catchment area. Donkey kong himself was mounted on a pin so that when the balls rolled behind him he moved to look like he had thrown the barrel. 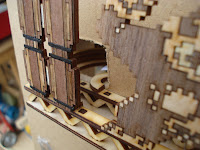 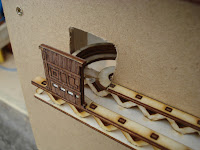 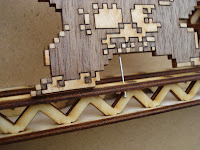 Failed CNC control
I always intended Mario to be fully controlled around the board. So much so I actually tore apart my functional CNC milling machine to drive Mario as required. I extended the vertical axis to give the required range of movement and I created some arduino code to drive the new XY frame to any given point on the board. At this point I realised that my lead screw driven CNC was simply not going to be fast enough for the job and with a week remaining (and virtually nothing else completed) I just didn't have time to rectify the problem so I had to drop it from the final build. Don't worry though V2 will be a complete remake and a belt driven XY frame is top of the list of things to change.

Oh and if anybody lives close enough to Leicester, UK or Nottingham and they would like this item then let me know, I'm intending to scrap it for parts so will sell for the cost of materials £80 (1 NES controller, 15 balls, all wooden parts.  NES box and Arduino not included),
Laser Cut Project 365