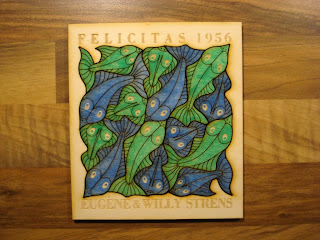 Yes it's another Escher, but after my discussion with Jeff from the artists market last week he linked me to this one and told me it was his favourite piece. I naturally was reluctant to do yeat another Escher but as I looked at it I couldn't figure out the symmetry pattern. The pattern then turned into a challenge and I started to draw it so I could work it out. I turned the final piece into a tray puzzle and painted each fish by hand. It's only when I put it up here and tried to find a reference for it I've discovered it's one of a set (don't worry I won't be doing those for a while) (svg for tessellation here)
45 Projects /49 Weeks 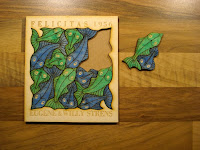 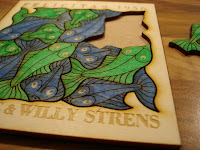 It's another twofer though. The more I do Escher conversions the more I realise that Escher shapes don't really tessellate, this is because they never really needed to. When they're drawn on paper you can just adjust the next shape so that they fit together. To make them tessellate I have to take the average of several shapes and decide what looks best. In this case I boiled the pattern down to 2 different fish (although 3 might have been better). These fish tessellate into the same basic pattern as shown in the original but can be continued in sheet form for as long as needed. 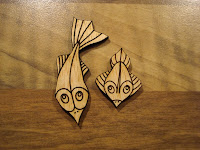 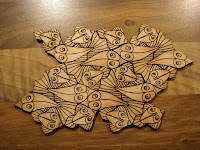