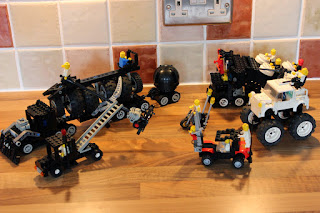 I must confess that I got a little bit distracted and carried away when Eli asked me to make him a Lego car yesterday. In case you haven't seen Fury Road I recommend you go and see it on the big screen it's weird, cool and it'll lose a lot of impact on the small screen. I fiddled and faffed with a few Lego pieces and was reminded of the film, from there I ended up making 6 vehicles based upon the ones in the film. 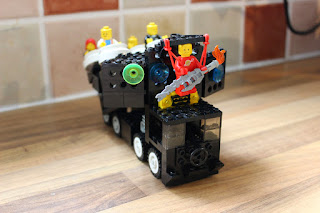 Doof is a pretty awesome flame throwing guitarist strapped to the top of one of the vehicles, 4 large drums on the back of the wagon provide accompaniment. We didn't find out much about him in the film but he does have his own back story. The drums are innards from some old Technic wheels, otherwise it's all fairly straight forward. The red elastic used to string up Doof comes from Technic drive belts in the days before NXT.

Furiosa drives a tricked out war machine of an oil tanker. The front end is a digger scoop and the rear end has a look out point. I used tires to make the container because I just didn't have enough slopey parts to do it the other way. The ball shape trailer comes from a weird rocket nozzle on a Bionicle rocket bike set. The baffles (which are now the right way round) are claws from the NXT set.

This is Immortan Joes first vehicle, it was a fairly straight forward conversion of a police vehicle. I flattened the back end raised up the base and put in some massive wheels. I tried to give it some rounded shape but again 90% of my lego is old and square. This one at least has working doors and an appropriately sized front window, only the best for the Immortan.

The pole cats swing on the end of these long poles which allows them to jump across to other vehicles and back again. This truck has a free swinging pole that's counter balanced with a motor bike and engine block and some spare wheels the whole thing returns to vertical and I'm quite pleased that I got it all mounted to a ladder (even if the cab is pretty boxy and ugly looking)

This was the first model I made, some of the bionicle blades I was waving around reminded me of the front of the dune buggy Max gets strapped to. The wheel arches are pretty much the only curved Lego pieces I have and they come from a Lightning McQueen model so Eli would be quite peeved if I painted them black. I'd like some more chains to hold Max down and tie him to the war boy.

Now that the photos are taken and the blog post is written I can stop behaving like Will Ferrol in the Lego Movie and actually let Eli play with them, dismantle them and rebuild them. In my defence a whole tonne of my childhood Lego is now going to work it's way over to his Lego box so I don't feel too guilty about it. (There's no way I can be bothered to sort it all out again)