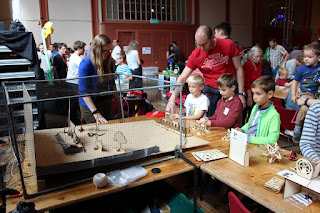 I'm falling behind with projects, possibly due to having 3 maker faires and 1 LRP event in a 5 week period meaning my August disappeared. This was a spur of the moment project for Brighton Mini Maker Faire at the weekend just gone. It went well though and the kids really loved it so it's now undergoing a complete redesign to make it stronger and sturdier, which I'll need in time for my Cambridge Hackspace workshop next weekend.

I've taken my mini catapults to maker faires for quite some time now but they tend to get overlooked especially when we tell kids not to fire ball bearings at us. This time round I thought it would be cool if we had something they could actually shoot at, we could then cut mini catapults on the laser and hopefully sell a few more of both. I built a small range on a slope with 10 targets to shoot at, the idea being that the balls would roll back to the kids and a small motorised mechanism would stand the targets back up again. Testing and construction was swift and I had most of a range to take along with us to Brighton.

During testing at home and before I had designed the restting mechanism I noticed my kids loved to stand the targets back up again by hand. So instead of making the targets stand up automagically I decided to put in a row of levers with strings running over to each target to reset them. The string runs over the top of each lever and wraps around a bolt sticking out the back of the mechanism. This allows me to easily disconnect the string, pull it tighter and then reconnect it so that the tensions can be adjusted. The limited movement of the lever prevents the string being pulled too hard and yanked out of the target end. 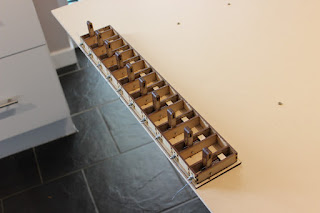 Each target was affixed to a little hinge mechanism, the targets can lie flat against the board and the little lever on the front is enough to pull it back up again. this was quick and simple. To add a bit of variety the middle 5 castle targets were put onto a podium on top of a hill (also adds a bit of perspective and allows for a castle much smaller than the people)

The Ensuing Carnage
Brighton Maker Faire was good as usual and pretty busy (although maybe less busy than the previous year). We had children swamping our stall from the moment the catapults were working 10am until they called time at 5pm. The whole range took a battering and I learnt a lot about how these things are going to break. Most importantly it was a success and that is prompting me to remake the range.


New wood is on order, I've booked a slot on the Nottingham laser to cut all the bigger parts I require and I'm hoping to get this whole thing remade in just a week. Watch this space.