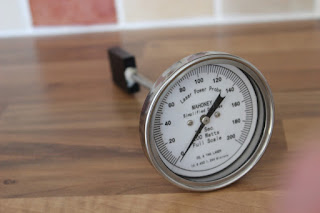 At first glance this might look like a turkey temperature gauge and you'd be forgiven for thinking that because that's basically what it is. It's actually a laser power meter which is essentially a thermometer for laser beams.

The large black block on the end of the thermometer is a thermal mass to hold the heat and it is placed in the path of the laser beam (usually before mirror 1). The beam is fired for a specific length of time and the laser heats the metal. The temperature change of the metal block is directly proportional to the amount of power being output by the laser. The whole gauge is calibrated to the dial by the length of time to fire the beam, in our case 15.3 seconds. 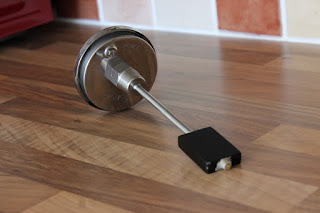 You have to let the gauge cool down between measurements, although you can hurry that along by dunking it in cold water. There is also an adjustment knob on the back which allows you rotate the scale so that zero lines up with the needles current position. 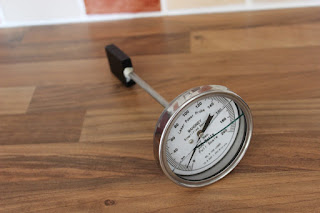 This also qualifies as a laser cut item, Dominic dropped it the other day and smashed the glass. I bought it home and 30 seconds later we had a new perspex screen to go into the gap :) 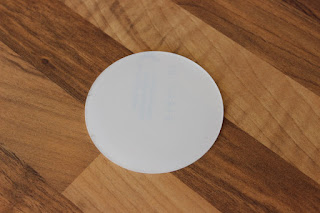