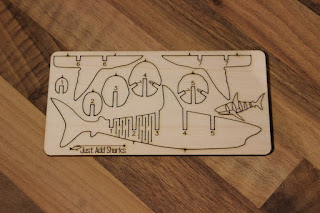 I have combined all my tips and tricks for making a good kit into this one new design now available for sale in my store. You've seen this shark pop up a few times recently but I've now turned it into kit form. It varies from the original shark after Sam from Shiny Shiny wisely suggested that I put a flex section in the tail.

The kit itself numbers each part on both sides of the slots so part 1 fits into slot 1 etc, but when they are slotted together both numbers are hidden from view. Each part is held into the framework by very small 0.8mm wide tab which can be easily broken (so no need for a knife) and each tab is pointed at by an arrow so you know where to snap. I have redrawn the Just Add Sharks logo to be a Hershey text font which makes it much faster to cut and I have also included a little illustration of an assembled shark which will also aid building. Buy one from the store or cut one for yourself. (svg here) 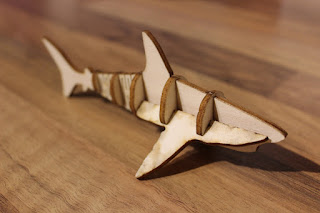 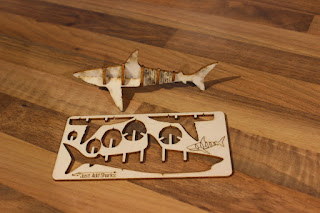