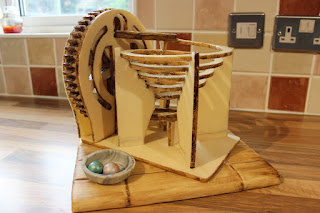 Around three months ago I found out I was going to be exhibiting at Cake International this weekend, I've been before and as well as the usual demo stalls and retailers there is a vast array of stunning cakes presented as competition entries. I thought I might as well throw my hat in the ring and join in with an entry. I've been working on it almost solidly for the last two weeks, so here it is, an edible version of my marble machine. 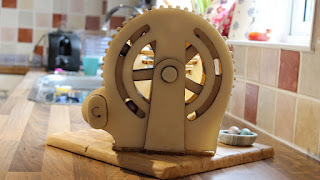 'Cake' is rather a loose definition based on most peoples understandings, these are mostly decorative exhibits and the competition itself is heavily categorised, each with different rules about what is and isn't acceptable. Some exhibits must contain cake, some can use dummies instead, some can use internal support structures and some must conform to a theme, you can see the whole categories here. I aimed for category M, 'Pushing the Boundaries' where pretty much anything goes any medium, internal supports and wiring could be used. I wanted to make my machine 100% edible but that gave me the widest range of fall back positions (after all I didn't know how I was going to do it when I started) 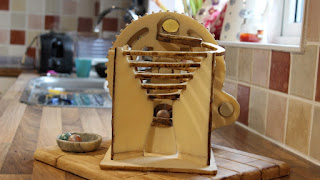 I had intended it to be a simple build, laser cut myself some gingerbread and assemble the parts. I ran some initial tests and I was able to make functional gears, I could rebake the cut gingerbread and get it to sink into a spiral shape and it all appeared to be going well. A few days later however I had noticed that the gingerbread parts had all sagged. I baked more gingerbread without any leaven ingredients I doubled and tripled the baking time but to no avail. I had to go back to the drawing board and find a new medium to work with.

I tried more tests on a wide range of materials, gum paste, sugar paste, royal icing and different biscuit recipes, I finally settled upon Massa Ticino sugar paste, mixed with a healthy dose of tylo powder to harden it. Once left to dry it hardened enough to span the distances I required. That left a problem of timescales, I couldn't wait 36 hours for each part so I had to borrow a food dehydrator to speed up the process. 8 hours at 50C seemed to work well and I could wake up to fresh parts each morning. All the parts would be cut by hand from rolled sheets, often using laser cut wooden parts for patterns. The edges of all the part were painted brown to made it look as though they were laser cut. 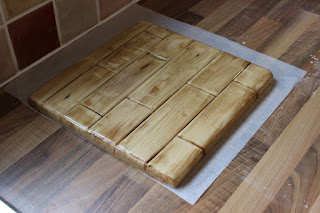 Each exhibit needs to be presented on a base board, like all my projects I decided to set the backdrop to be the same as my kitchen bench (I've seen comment elsewhere on the internet that somebody knew a project was my work because of the bench backdrop). There are lots of good tutorials about making wood grain patterns so I just followed one of those. The base board gave me something to build upon and to figure out where to put things, I always knew this would be a double sized machine really.

The next significant part was the spiral itself, this was always going to be too big to fit in the dehydrator so it would have to live in the airing cupboard for a few nights. The spiral had to be built in place upon it's vertical stands so the framework had to fit around all of those parts. A spiral was glued down into wooden frame and then cut into 4, each loop would now be supported and once dried the frame could be removed in sections. This ended up being incredibly useful to ensure the item didn't break during transport to the event.

While the spiral was drying I made the vertical panels that hold the main gear in place. The gears were going to be heavy and all that weight would be put through a single point of the panel so I decided to double up the wall thickness in strategic places. The spiral attached to the top hole and was glued into place using sugar glue. The secondary rail was also glued into place and supported at the other end by one of the verticals on the spiral.

The gears were made with 3 layers of sugar paste to make them 20 mm thick (wide enough for a ball bearing). The larger geared weighs nearly 1 Kg which is a lot of shear force to put through a small disk of sugar paste held on with sugar glue. The solution lay with dried spaghetti (the cake only has to be edible, not tasty). Strands of spaghetti were pressed through a stack of disks that formed the axle stubs, liberal amounts of glue was placed between the layers in the hope that it would strengthen the joint and finally the whole stub was painted with edible shine, which is kind of like varnish for cakes. The inside of the hole was also varnished with the hope that the two smooth surfaces would produce minimal friction.

I used a fresh piece of sugar paste to make small end caps to the axles and hide the spaghetti. I also glued the handle onto the smaller gear, at this point it had to go through the second vertical panel. Both pieces were now awkward and couldn't be placed flat upon a surface so I quickly knocked together a jig to support the weight while keeping the ends safe. The teeth of the gears were also varnished to add strength and reduce friction. After some initial testing (and videoing) the whole machine was reassembled on the day at the venue.

The edible marble machine obviously can not be motorised so most of the time it's going to be static on display (I can't let random members of the public crank the handle because they'll break it). To add some motion to the exhibit I also made a small wooden marble machine with a motor. This smaller machine was an exact replica of the new cake version, reinforced in all the same places. It was placed on a wooden board next to the cake board along with some text describing the arrangement and inviting the judges only to use the machine. 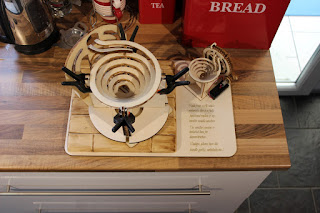 Day 1 is now complete, the Judging phase is over, as soon as I have some results I will let you know how I fare.
Cakes Laser Cut 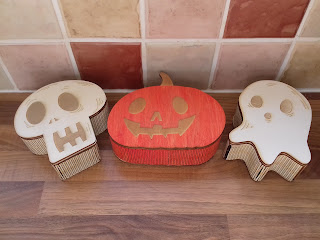