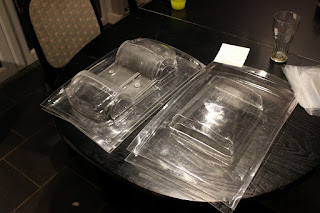 Every day is a learning day here where I try new things and make something new. Makevember is encouraging people to make one thing every day, I don't know if I'm going to be able to do that (especially when I'm exhibiting at the NEC for 3 days this weekend) but I would hope to start using some of my newer tools a bit more. In the meantime I thought I'd just post some of the things I've made today. This is a selection of all the things I'm allowed to show you, I've actually spent most of the day working on a large project (more details on Monday).

One of the important things about doing this every day is that you learn something from everything you do, I'll also briefly describe what I learned from these things.

Pictured above are some car shells for remote control cake cars. These were vacuum formed from 1mm HIPS and I learned a lot considering I haven't formed anything for a few weeks. Plastic sheets come in multiple sizes, buy them too small and they won't fit in the former. Plaster of Paris moulds absorb moisture and go mouldy unless you take extra car of them

I laser cut a whole bunch of stencils from mylar, these are going to be used in classes to teach airbrushing for cakes. I created artwork and ran them through the laser, I learned about how small details disappear and how deceptive it is working at zoom levels in inkscape. 12 sets were made in total and packed into bags.

For the fairy scene the image was broken into small parts so that it can be built up into a full picture. There are too many stencil islands on something like the dandelion so the main stem is made first and then a dozen seeds can be added after.

Once the brick wall has been painted there is going to be some graffiti added afterwards. This Wham sign has some simple bold colours but there is a lot of detail in the black sections. The star outline can be done in a single stencil but the word outline needed to be split into two separate stencils, one for the top half and one for the bottom.

Once the first graffiti was done, the second one was much quicker. I had worked out the kinks and how the lettering needed to be split so this was just a matter of following the same process.