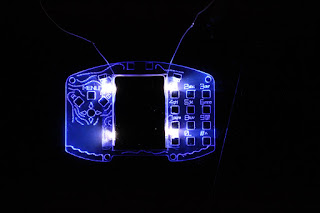 EMF Camp 2018 just released details about the badge for this years camp and it looks incredible as always (Hackaday has a great summary). It's a full blown smart phone which can be used on site using the local network or on a standard gsm network after the event. Like a lot of camp badges though, despite amazing innovations it's still just a bare circuit board dangling round your neck ready to short out against objects (like the metal of the laser cutter) so there is a bit of a need for a case to protect it.

I'm one step ahead of the curve this year and hopefully I've produced the first badge hack of 2018. I initially cut a nice wooden case to show off the fine details that a laser cutter can produce and then I cut one in florescent plastic to glow under the UV lights of Null Sector. Finally I realised I could patch into the 3.3V that is one the board itself to produce a fancy edge lit case (hard to take a good photo of it though). 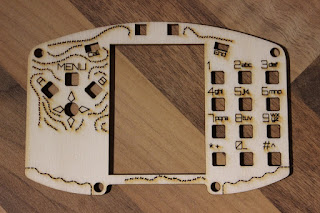