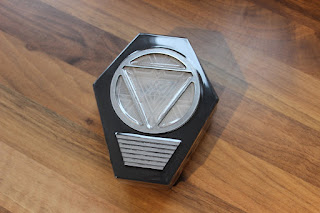 I delved into the realms of a Cyberpunk LRP system this weekend just gone. It was good fun and there was lots of opportunity to make techy objects for the game. This game featured airsoft weaponry so strength is another issue to consider The first item is a shield unit, energy shields take an hour to recharge once they've served their purpose. This unit times the hour for you, leaving one less thing to remember while you're running around doing everything else.

The unit is made from a mixture of acrylic and wood, the whole thing has been vacuum formed with a sheet of HIPS plastic to make it waterproof and robust to being shot. A large clip on the reverse makes it easy to attach to other pieces of kit (quite a lot of people wore military gear with lots of webbing/straps). The lower silver panel is actually a push button, it was intended to require a firm squeeze to operate to prevent it from being triggered accidentally. 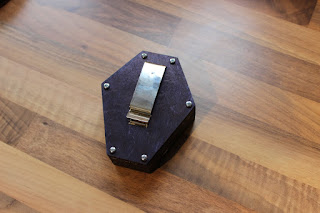 A rotating ring of blue LED's shows that the shield is in operation, one button push and the unit switches to orange recharging mode. In this mode the whole rings lights slowly over the course of an hour, when the ring is half lit then you know it's been 30 minutes. After an hour it switches back to blue rotating lights.

The unit is powered with a rechargeable battery bank, the batteries were tested before the weekend and managed to power the unit for a whole 72 hours so 48 hours at the event should be fine. Once home again it can be plugged into any USB socket to recharge it.

I didn't actually get any video of the final unit in operation but here is the prototype which will give you the idea.