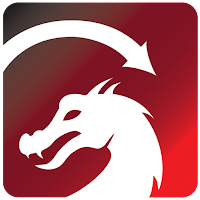 Over the last year there has been a steady rumbling in the laser cutting communities and significant amounts of love being voiced towards a new piece of software on the market. Lightburn is layout, editing, and control software for your laser cutter. It's software that talks directly to your laser cutter and replaces the slightly dubious and buggy software that the controllers are shipped with. It's in very active development and all the reviews are good, it got to the point where I could no longer ignore it and I felt I should check it out. 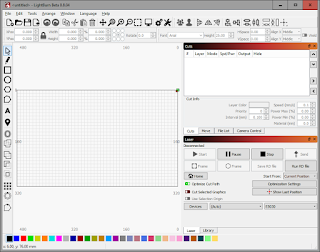 Initial investigation of the screenshots show a familiar interface, all well polished and functional. Lots of additional buttons compared to the standard Lasercut 5.3 interface I'm used to. It appeared to have better control over the laser cutter itself as well as support for material libraries, camera control and sensible move functions. It imports svg files directly, so no more faffing around converting to dxf first and there is a free trial version so you can make sure everything works before you commit to a purchase.
With all these good things going for it, you may be wondering why I haven't been using it all year. Well there is only one minor drawback, it does not connect to the Leetro controller. There are a couple of commercial projects that talk to the leetro controller and even an attempt to reverse engineer the software but most of these projects seem to have stalled and Leetro were never exactly helpful when we had problems with their system so I suspect it may be some time,if ever, before Lightburn can include it in their list. All is not lost though, the MPC6535 is an obsolete controller anyway and there are much better options available. 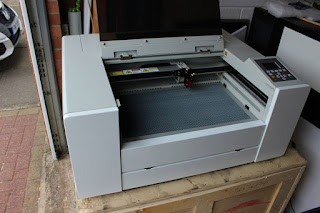 If you rely on a laser cutter for your day to day business, the idea of taking it out of action just to test a new controller is a little bit daunting. Every few days you'll have to put the old one back in to clear your workload. You may remember that in September I started importing these new machines for people. These machines came with a Ruida controller, as requested by me, and that finally allowed me to check out Lightburn for real and I was totally blown away.

The software starts with a familiar feel, allowing me to quickly set up layers and operations for cutting. Sending them to the laser was easy and I was cutting in no time at all. I ran into a little bug with the calibration of my new machine which caused the engraving to be misaligned and it took me just a few seconds to find how to fix it in the support documentation. Lightburn is fantastic and I'm definitely sold, all the new machines after that have been imported with Ruida controllers. 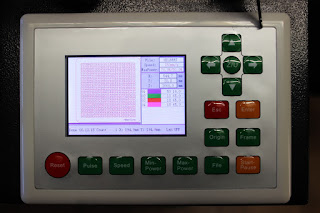 It should be noted that Lightburn isn't solely responsible for vast improvement on the new laser. The new machine was totally built for speed with an RF tube so the hardware is significantly better. The Ruida controller is also significantly better than the Leetro controller, the colour screen and UI makes controlling jobs and operation much easier (no more pressing the esc key before using the keypad). Lightburn is the front end of the system, it's the piece of software you use all the time and it is good.

It might seem unfair that I'm comparing my old laser running Leetro\Lasercut against my new fancy system running Ruida\Lightburn but this blog post is really just an introduction to a series of blog posts. I liked the new system so much I decided to upgrade my big old machine too and like most of my projects I thought it would be sensible to bring you all along for the ride.
Laser cutter Lightburn